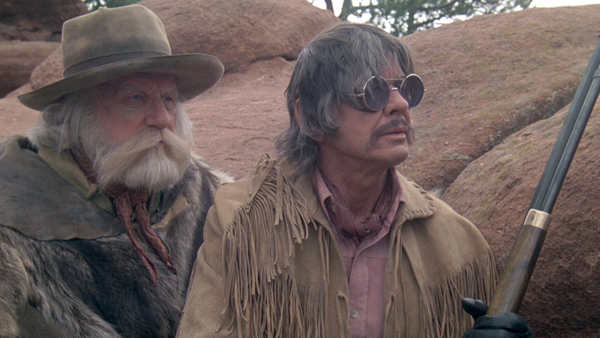 After the blockbuster release of 1975's "Jaws," the global film industry was eager to cash in on its success, scrambling to find material that played with haunted characters and monster animal attacks. In 1977, producer Dino De Laurentiis developed a few of his own entries in the sudden subgenre, with "Orca" and "The White Buffalo" emerging with stories of bloodshed and revenge, pitting man against an unstoppable enemy. While "The White Buffalo" teases exploitation elements, especially with Charles Bronson in the lead role, the western, directed by J. Lee Thompson, is actually more of a meditation on wild west reputation and aging obsession, more interested in exploring personalities and fragmented communication between recognized foes than dealing with visceral horror. Of course, a gigantic white buffalo does appear in the picture, using its strength and size to mow down and harpoon seemingly innocent humans, but at the feature's core is a quest to capture the ragged edges of Wild Bill Hickok and Crazy Horse, working to understand clouded headspaces as their vivid and violent legends work to stunt their growth as men. Read the rest at Blu-ray.com