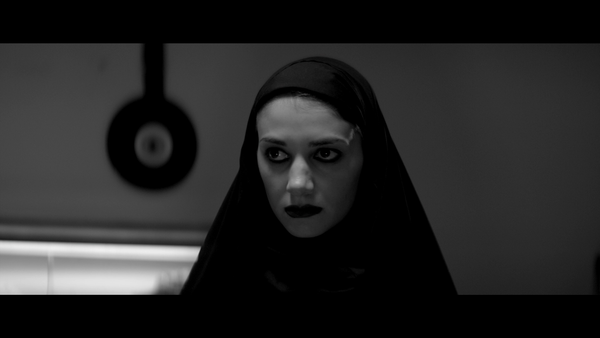 "A Girl Walks Home Alone at Night" isn't really a narrative-driven picture, it's a collection of influences filtered through writer/director Ana Lily Amirpour. Collecting everything she loves about horror, surrealism, and westerns, the helmer attempts to mold a genre tale that doesn't bother to drop anchor. It's dreamlike and stylized, but "A Girl Walks Home Alone at Night" isn't cohesive, frequently caught up in cinematic references when it should be concentrated on characters. Mix Tape filmmaking is undeniably appealing, but only when there's a sense of leadership behind the production. This is Amirpour's debut feature, and it feels like the work of somebody who's excited to make a movie, but doesn't have the discipline to unify her love of the arts. More Robert Rodriguez than Quentin Tarantino, Amirpour's effort has select moments of striking beauty and originality, but as a whole, the endeavor is more obsessed with obsession than building a steady nightmare. Read the rest at Blu-ray.com