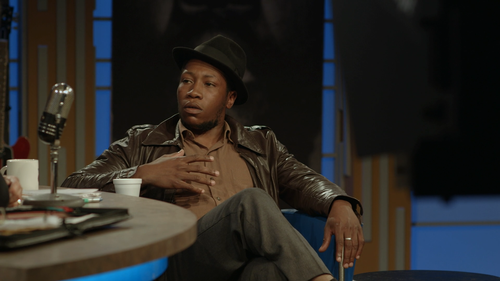 There is a vibration of life that runs through "Memphis," which eschews a straightforward narrative approach to soak up the details of the famous city and the picture's star, musician Willis Earl Beal. Playing a variation of himself, Beal is our guide to madness, watching the broken bluesman attempt to consider his limitations during a potent period of creative blockage, dealing with impatient record label executives and various supporting characters in his life, including his son. Insular but effective, "Memphis" is an evocative odyssey into confusion and the responsibility of influence. Read the rest at Blu-ray.com

The journey began with 2012’s “Bad Ass,” where writer/director Craig Moss endeavored to turn the Epic Beard Man viral video into an action film, using elements of parody to beef up a movie based on a three minute YouTube upload. Lines of profit being sketchy in low-budget cinema, a sequel was ordered up, recruiting Danny Glover to co-star with Danny Trejo for “Bad Asses,” resulting in an equally uninspired blend of comedy and shootouts. What started as a lark for Moss has now turned into a franchise, with “Bad Asses on the Bayou” extending the adventures of Frank Vega for another chapter, this time moving the shenanigans from Los Angeles to Louisiana, but the script remains the same. Read the rest at Blu-ray.com

The sci-fi interests of writer/director Neill Blomkamp were introduced with “District 9,” which creatively used allegory to amplify genre appetites, elevating the work away from typical mindlessness. His second effort was “Elysium,” another politically-charge actioner following the same intellectual template, only its message was buried under a thick layer of noise, with Blomkamp slipping into overkill to preserve his cinematic punctuation. “Chappie” is his third “big idea” blockbuster and another career misstep that tenders the idea that perhaps Blomkamp is a one-trick pony. More headache-inducing than “Elysium” and unclear in its thinking, “Chappie” is only valuable as a visual effects display, with any attempt at dramatics frighteningly inept, while acting by select cast members is sure to be remembered as the worst of the year. Read the rest at Blu-ray.com

In 2007, Adam Carolla co-scripted and starred in “The Hammer,” a breezy boxing comedy that attempted to translate the comedian’s sense of humor for the big screen. It was feisty and fresh, making Carolla appealing as he worked through his rehearsed bits. “Road Hard” doesn’t share that same spunky attitude as it once again mines Carolla’s point of view for cinematic misadventures. Instead of massaging old jokes into the script, “Road Hard” nail guns tired material to a clichéd plot of professional and familial humiliation and burgeoning love, becoming the type of saccharine, predictable movie Carolla has spent his entire career making fun of. Read the rest at Blu-ray.com

Vince Vaughn needs to take a break from making comedies. It doesn’t have to be a permanent one, but it has to be long enough so the actor can shed his bad habits when it comes to creating screen hilarity. His once Ginsu-sharp instincts for funny business have dulled to a frightening degree, with his latest, “Unfinished Business,” another feeble attempt to stage boisterous mischief with a heart, trying to extract a few tears between bellylaughs. The picture is a drag, playing up Vaughn’s uninspired formula for a surefire hit film. “Unfinished Business” certainly has the potential to tear through madcap Euro-based misadventures, but it would rather stick to sobering reminders of real-world behavior, draining most of the fun out of a feature that aims to please. Read the rest at Blu-ray.com

Nothing was really expected with the 2012 release of “The Best Exotic Marigold Hotel.” A minor British dramedy, the picture wasn’t destined to find much of an audience, issued during a month of movies that celebrated comic book heroes and super sequels. But word of mouth lifted the little film to surprising grosses. Not blockbuster returns by any means, but just enough coin to make the production company pay attention, making a dent with its Indian locations and cast of seasoned actors. And now a sequel has been made, laboring to find a story that could extend this newly minted franchise for another chapter while presenting its cast with enough fresh drama to keep all parties interested. Read the rest at Blu-ray.com

A vision of crisscrossing characters engaged in destructive behavior is nothing new, but “Human Capital” finds way to make the familiar fresh again. Director Paolo Virzi avoids the oppressive Alejandro Gonzalez Inarritu route to find a vein of suspense that carries the viewing experience through four chapters of accidents, accusations, and panic, braided together with a fluid sense of community. It’s a dark picture, touching on volatile emotions and devastating mistakes, but it holds attention through Virzi’s storytelling skill and an excellent cast, who portray the often devastating turns of fate presented here with a welcome sense of restraint, allowing internalization to do most of the heavy lifting. Read the rest at Blu-ray.com

“Buzzard” is a difficult film to describe and a taxing movie to sit through. Taking on the angry young man genre, writer/director Joel Potrykus dries up the rage and keeps the unrest, electing for a darkly comic approach to troubling psychological behavior. It’s a strange effort that only reaches for modest goals in laughs and disturbing material. It’s more comfortable in stasis, with long stretches of the feature devoted to mind-numbing tasks. For some, the mummification of pace will take on a higher meaning, reflecting the slack-jawed state of working-class millennials. For everyone else, “Buzzard” might register as unforgivable tedium, missing the type of dramatic surges necessary to reward such concentration on nothingness. Read the rest at Blu-ray.com

“Two Men in Town” comes dangerously close to profundity. It’s a sharply acted drama about the past and its chokehold on life, providing characterizations that aren’t always complete and easy to classify. Director Rachid Bouchareb doesn’t follow through on a few promising subplots, but what lingers here remains powerfully realized, depicting the futility of self-control and the longevity of grudges. “Two Men in Town” eventually fails to live up to its initial promise, but as an overview of human frailty, it contains several powerful scenes that allow the cast room to articulate complex emotions in an honest manner. Read the rest at Blu-ray.com

As thrillers go, “October Gale” is mostly effective but strangely distant. Reuniting with her “Cairo Time” writer/director Ruba Nadda, actress Patricia Clarkson makes a plausible transition to home defender, wielding a gun and selling suspicion with co-star Scott Speedman. However, “October Gale” takes a substantial amount of time to get going, with those early moments filled with a far more interesting examination of grief, making the picture a rare event where action isn’t entirely welcome, distracting from a far more satisfying examination of a broken heart. Credit to Nadda for the change in expectation, allowing her feature to step away from formula and reach the viewer in a different way. Read the rest at Blu-ray.com

Throughout his career, actor Leland Orser hasn’t made much of an impression. He was hit with typecasting for a long time, always the go-to guy to play twitchy, screechy types on the verge of a nervous breakdown. He’s been wallpaper as well, playing one of the background characters in the “Taken” trilogy. “Faults” is the first truly substantial Leland Orser performance I’ve seen, asking more of the man that most other productions would, and he’s up for the challenge, providing a riveting depiction of frayed respectability and financial desperation colliding with professional responsibility. “Faults” is lucky to have such an unusual presence, as the rest of Riley Stearns’s directorial debut tends to deflate when he’s not around. Read the rest at Blu-ray.com

Most anthology films go out of their way to provide a reason for the sampler selection of stories. The Argentinean feature “Wild Tales” cuts out the middle man and delivers titular narratives of disaster, frustration, and love without explanation. It’s a mixed bag but the movie covers a lot of ground, attempting to disorient viewers with disparate perspectives on the humiliations of the world. Some of it is funny, most of it is puzzling, but when writer/director Damian Szifron locks into the weirdness of the moment, stacking coincidences and playing with puzzled reactions, “Wild Tales” finds a welcome shot of mischief. Read the rest at Blu-ray.com

Blu-ray Review - Cult of the Damned 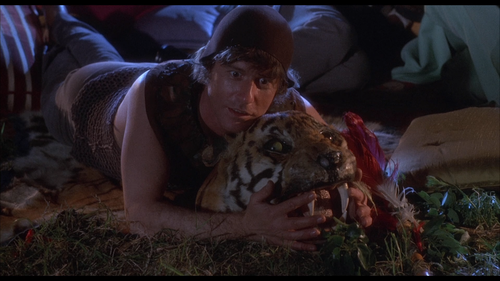 Reflecting a country in the midst of a seismic cultural change, cinema of the 1960s attempted to address the ills of a nation. Following a trail set by psychedelic drug use and political upheaval, filmmakers set out to create eye-popping, feral pictures that would appeal to a younger audience, often transforming parental figures and the rest of the establishment into villains, demonizing their authority and commitment to greed. A lesser known entry in the "groovy, man" uprising is 1969's "Cult of the Damned" (a.k.a. "Angel, Angel, Down We Go"), a movie that doesn't have much in the way of dramatic firepower, but it's drenched with period-specific malaise and rock and roll influence, emerging as a musical crossed with a teen angst drama, with elements of horror, abstraction, and daredevil sports poured into the brew. It's exhaustively repetitive and brutally snail-paced, but for those who automatically embrace counterculture cinema generated during this particularly volatile era, "Cult of the Damned" is a lost entry in the freak-out subgenre. Read the rest at Blu-ray.com 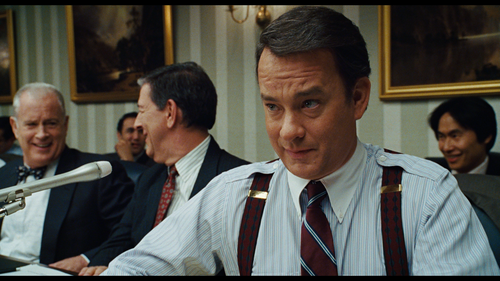 Although it teases the presence of political debate with a hot potato subject, "Charlie Wilson's War" is more of a cocktail hour movie, treating significant world events as everyday business. Focusing on American influence during the Russian invasion of Afghanistan in the 1980s, the picture shies away from the grim details of the conflict, preferring to explore its rather unlikely genesis, with screenwriter Aaron Sorkin and director Mike Nichols (this being his last film in an amazing career) creating a sense of playfulness while juggling troubling facts, trying their best to keep the true-life tale approachable despite its substantial carnage, underhanded dealings, and eventual ties to American disaster. It's not entirely successful as a comedy, but "Charlie Wilson's War" has a certain spring in its step that keeps it appealing. Read the rest at Blu-ray.com 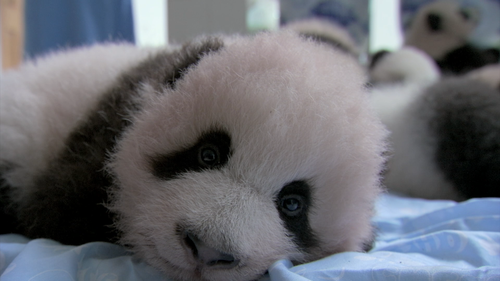 The world is changing, always evolving. "Earth: A New Wild" is a five-episode series dedicated to understanding how nature is coping with its future, sending host Dr. M. Sanjayan around to numerous continents to discover the secrets of planetary growth and how extremes as processed by animal life. Through "Home," "Plains," "Forests," "Oceans," and "Water," "A New Wild" takes time to study impending disaster and hope for a brighter tomorrow, focusing on human involvement to help ecosystems and creatures along, working diligently to correct many mistakes made along the way. It's an epic look at the corners of Earth and its mysterious ways, with Dr. Sanjayan excited to share his often remarkable findings with the viewer. Read the rest at Blu-ray.com