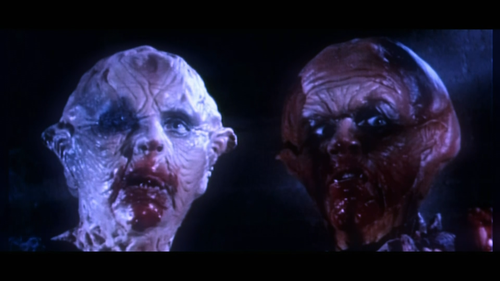 Troma Entertainment isn't known for their commitment to quality film. They specialize in easily marketable schlock, often drawn to frightfully violent entertainment to secure interest from horror genre admirers. The company's purchase of the 1988 Belgian picture, "Rabid Grannies," comes as no surprise, finding the provocatively titled endeavor happy to share its fascination with the grotesque, developing a thin storyline to service what becomes a random grab-bag of nightmarish imagery tied to a loosely defined demonic possession. At 68 minutes, it's barely a movie, but that doesn't stop director Emmanuel Kervyn from trying to squeeze suspense out of absolutely nothing, playing to the back row with broad performances and a few tasteless encounters, all funneled into a senseless scare feature that's never authentically unnerving outside of frighteningly inept editorial decisions. Read the rest at Blu-ray.com