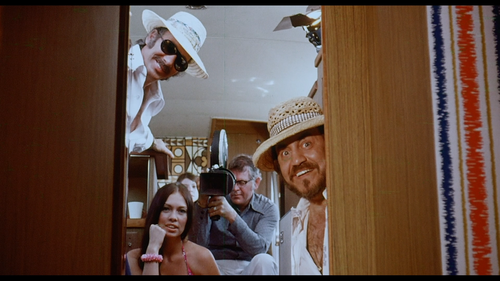 About 17 years ago, when I attended a midnight showing of "The Beyond" during its brief Quentin Tarantino-approved re-release, I received my first look at Duke Mitchell's "Massacre Mafia Style" (a.k.a. "Like Father, Like Son" and "The Executioner"). The trailer (later revealed to be the opening sequence of the endeavor) was a display of ultraviolence and unintentional comedy that blew my mind, sharing a bizarre vision of mass death, bad acting, missed cues, and big hair that proved to be irresistible, triggering an immediate need to see the film. Contact would come years later at a cult movie society screening, which utilized a print that was likely used as finish line tape for local marathons, leaving the viewing experience unstable, mucking with Mitchell's idiosyncratic vision. Now "Massacre Mafia Style" has arrived on Blu-ray with a revived image and clear soundtrack, allowing B-movie daredevils and the curious an opportunity to view the effort as Mitchell intended, permitting appreciation for its substantial passion, iffy creative choices, and torrent of violence. Read the rest at Blu-ray.com