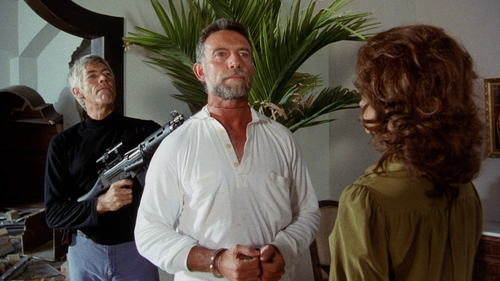 Actor James Coburn is no stranger to the world of superspy franchises, having worked through the lighthearted Derek Flint pictures of the 1960s. 1979's "Firepower" has a bit of James Bond envy, with "Death Wish" director Michael Winner working to mount his own take on exotic locations, golden women, and roughhouse men attempting to save the world. A brawny, noisy movie, "Firepower" is a reasonable facsimile of a Roger Moore-era 007 adventure, favoring excessive characters, stunt-heavy action, and a few secret agent tricks. However, Winner isn't entirely out to replicate, adding his own extremes to the effort, laboring to energize a plot that's basically a basic bounty hunter story into a towering display of excitement. The feature almost gets there, aided by a few violent chases and escapes, but it's not the most stimulating endeavor, periodically lost in laborious expositional banter that doesn't widen the scope of the hunt as profoundly as the production imagines. Read the rest at Blu-ray.com