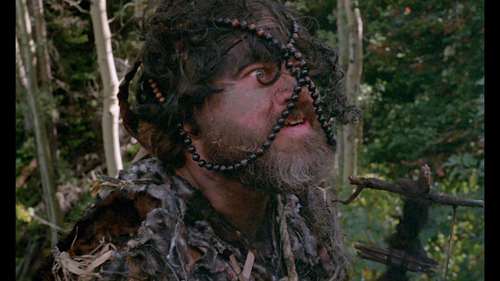 "Don't Go in the Woods" is as close to a cinematic representation of a stroke as I've ever seen. The 1981 shocker seems like a cruel joke from director James Bryan, who, all fueled up on the slasher craze of the era, elected to try out his own take on the permissive subgenre, moving the action into the wilds of Utah mountain areas. Surrounding himself with friends and family, armed with script credited to Garth Eliassen, Bryan fights for some type of cinematic vision with "Don't Go in the Woods" (sometimes known as "Don't Go in the Woods…Alone!"), but filmmaking skill eludes the man. Stumbling through a series of casual kills with unidentified characters, the effort looks to chill viewers with displays of random violence and agony, but it mostly confuses in a way I've never seen from a horror picture. Without boundaries and sense, Bryan coughs up a greatest hits reel of pain, trying to pass off the wildly scattered results as some type of parody, but it's mostly just nonsense, albeit periodically amusing nonsense. Read the rest at Blu-ray.com