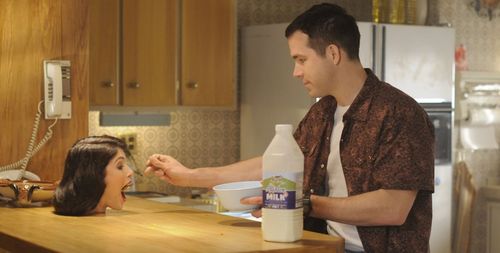 I pity the poor marketing lackey put in charge of selling “The Voices” to the public. It’s strange enough to watch the pitch-black comedy, but to gift wrap it in a way that would encourage ticket sales is an impossible challenge. Thankfully, there’s a quality film here that’s worth a look, especially for audiences in the mood for grim events and strange behaviors as the screenplay blends a love story with a serial killer origin tale. Director Marjane Satrapi (“Persepolis”) pulls off an impressive tonal tightrope walk with “The Voices,” and while it isn’t always steady on its feet, the effort is strange enough to connect, creating spaces of comedy and genuine horror that keep viewers interested in this depiction of developing mental illness. Read the rest at Blu-ray.com

Matt LeBlanc has proven himself to be a fairly popular television actor, joining the pop culture legend ranks as Joey Tribbiani on “Friends” and recently showcasing his comedic skills on “Episodes.” Big screen acceptance has eluded the performer, with “Lost in Space” unable to secure him a franchise, and there’s 1996’s “Ed,” which is the only time I’ve ever seen children walk out of a screening. “Lovesick” adds to LeBlanc’s leading man woes, once again attaching his amiable charms to a DOA project, fighting for oxygen while the production introduces all kinds of sitcom formula to generate a sufficiently madcap tone. “Lovesick” lives up to its title, as it’s hard to feel anything but nausea after sitting through it. Read the rest at Blu-ray.com 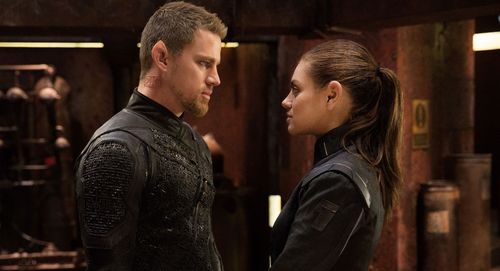 Lana and Andy Wachowski have endured a bumpy career since the completion of their “Matrix” trilogy in 2003. Efforts such as “Speed Racer” and “Cloud Atlas” have shown customary visual and narrative ambition, but remained unrewarded at the box office, proving to be too esoteric or nutty for the general audience, leaving them in a position of dwindling big studio faith. “Jupiter Ascending” is the Wachowskis most direct attempt to re-enter the “Matrix” mindset, constructing a big-budget fantasy fireworks display that’s primarily devoted to the explanation of the plot. Somewhere between “wow!” and “huh?” resides “Jupiter Ascending,” a nifty looking but ultimately joyless thrill ride that solidifies the siblings as the king and queen of overthinking sure things. Read the rest at Blu-ray.com

Film Review - The SpongeBob Movie: Sponge Out of Water 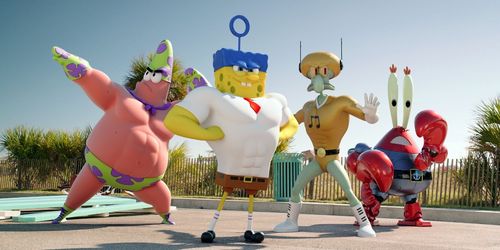 In Hollywood time, it’s been about a thousand years since the release of “The SpongeBob SquarePants Movie,” which introduced the volatile Nickelodeon creation to the big screen. While it wasn’t a smash hit, the picture still managed to do encouraging business. That it took 11 years for a sequel to arrive is a bit of a surprise, but “The SpongeBob Movie: Sponge Out of Water” is worth the wait, refreshing the source material’s freakish energy and dedication to silliness for another round of madcap adventuring, with the gimmick for this outing being the opportunity to see beloved characters captured with CG-animation, expanding creator Stephen Hillenburg’s cartoon universe. Read the rest at Blu-ray.com 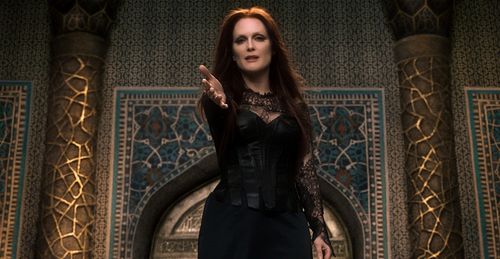 “Seventh Son” endured some difficulties as it made its way to the masses, missing a few release dates and changing studios. Finally seeing the light of day, the picture arrives late to the party, unleashing a torrent of visual effects and fantasy touches as it attempts to play the kid-lit lottery, adapting a 2004 book by Joseph Delaney. While never boring, “Seventh Son” is shellacked with excess, emerging as a particularly noisy extravaganza, not an imaginative one. Co-stars Julianne Moore and Jeff Bridges are amusing to watch, but the movie doesn’t offer excitement, finding ways to make swooping dragons, magical creatures, and heroic destinies quite dull. Read the rest at Blu-ray.com

I’ll admit, when it comes to the filmography of writer/director Eric Schaeffer, I tapped out a long time ago. The “If Lucy Fell” and “Never Again” helmer was fairly skilled at testing patience with flimsy comedies and self-serving dramas, slipping into seriously indie movie mode over the last 15 years to keep his career on the move. Perhaps time apart has softened my Schaeffer sensitivity, because it’s a pleasure to report that his latest, “Boy Meets Girl,” also happens to be his best. A compassionate and mercifully restrained drama, the picture does an exceptional job teasing viewers with punishing cliché, only to subvert expectations whenever possible. It’s a lovely feature, sweet and real, highlighting Schaeffer’s maturity as a filmmaker and his appreciation for softer moments of heartfelt confession. Read the rest at Blu-ray.com

It’s easy to poke fun at the current state of Nicolas Cage’s career, but the actor has certainly tried to entertain himself while collecting paycheck after paycheck. 2014 found Cage as an honorable but flawed southerner, a vengeance-minded criminal, an airplane pilot confronted with the rapture, and a testy CIA agent heading out on his final mission. Kicking off the new year, Cage transforms into 15th century crusader who eventually hides out in the Far East, adopting a local outfit and hairstyle. “Outcast” isn’t explicitly a Nicolas Cage movie (it’s more of a supporting role), but he’s the highlight of this overdirected blur of action sequences, spicing up a dull viewing experience with his habitual oddity and unbridled enunciation. Read the rest at Blu-ray.com

Surprises are few and far between in “Love, Rosie,” which coasts entirely on the appeal of its stars, Lily Collins and Sam Claflin. The pair commits to the material with every fiber of their being, but passable chemistry and a few effective moments of introspection can’t scrub off the scent of recycling, as much of the movie plays like a “Bridget Jones” sequel. The talent is likable, but few scenes connect as profoundly as director Christian Ditter envisions, rendering the effort heavy with quirk and an abuse of coincidence, and light with urgent matters of the heart. Read the rest at Blu-ray.com 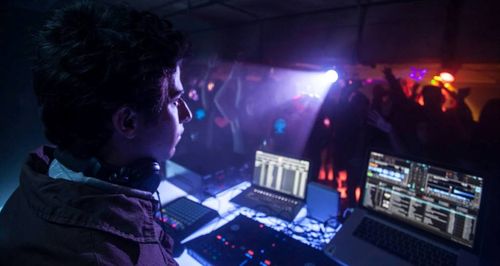 Possible insanity and aggressive music collide in “Enter the Dangerous Mind,” a loose study of schizophrenia that only work from afar, as any close inspection of its working parts reveals thematic and creative limitations. Electronic dance music fills the picture with grinding and throbbing, but it does little to compliment what attempts to be a study of a psychological breakdown. Directors Victor Teran (who also scripts) and Youssef Delara are unable to use abrasive sounds to cover for a lack of atmosphere, and while a starring turn from Nikki Reed brings out the depth of a desperate situation, “Enter the Dangerous Mind” is more of a surface examination of brewing instability, missing cinematic precision. Read the rest at Blu-ray.com 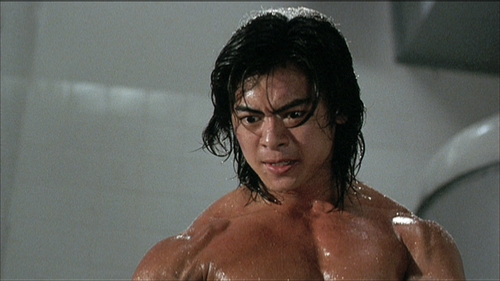 There's plenty of bizarre cinema out there to sample, yet few have the capacity to both horrify and delight quite like 1991's "Riki-Oh: The Story of Ricky." Based on a Japanese manga that reveled in violence, the film adaptation isn't one to let fans down, ordering up a buffet of carnage that includes impalements, disembowelments, beheadings, skinnings, and a considerable loss of limbs. A wildly over-the-top effort, "The Story of Ricky" is also aware of its extremity, often caught braiding emotional sincerity with cinematic absurdity. The narrative does take a few naps as it slowly unfolds, but storytelling isn't a top priority here. Director Lam Nai-choi is more enlivened by the challenge of orchestrating macabre antics between feuding characters, splashing blood and screams all over the frame as every martial arts-based encounter turns into an occasion to detail excessive gore. There's a certain thrill in viewing such goofball hostility, and the feature isn't afraid to go absolutely bonkers when necessary. Read the rest at Blu-ray.com 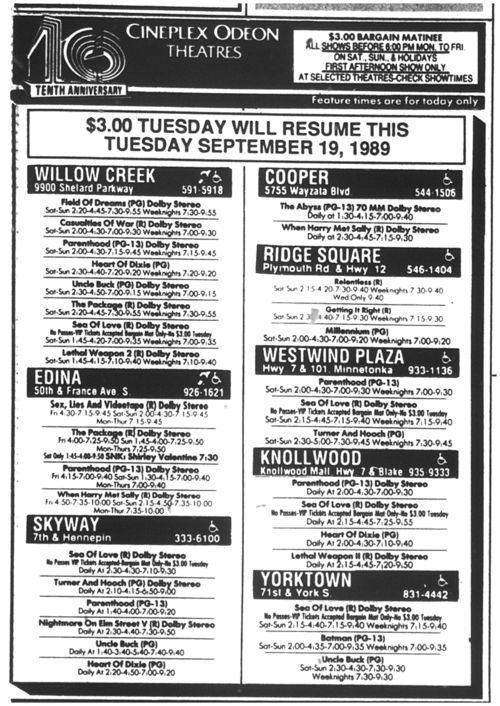 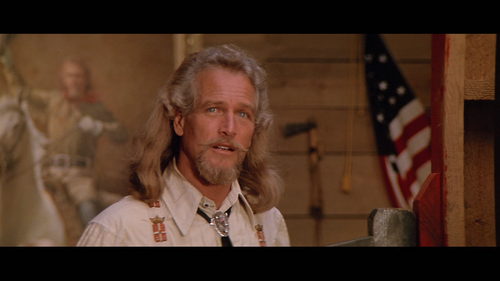 After scoring a career highlight with 1975's "Nashville," director Robert Altman followed up one of his most famous efforts with a movie that perhaps only his die-hard fans have seen. 1976's "Buffalo Bill and the Indians, or Sitting Bull's History Lesson" is far from Altman's most lauded work, but it's one of his better pictures, spotlighting a filmmaker working his gifts with conviction, bringing in major Hollywood heavyweights to help him realize his idiosyncratic vision. In this case, the star is Paul Newman, yellowing his teeth and wearing a cruddy wig to portray a Wild West icon coming to terms with the crumbling foundation of his mythological origins. While "Buffalo Bill and the Indians" teases a tone of revisionist western lecturing, it remains a semi-comedy with outstanding screen detail, electing to trust the audience when it comes to the deconstruction of a western legend by simply providing the uncomfortable particulars of these characters and their abrasive interaction during a time of premiere American storytelling. Read the rest at Blu-ray.com

Blu-ray Review - Return to Me There's never been any doubt that Bonnie Hunt is one of the funniest performers around. Her whip-crack wit, inherent geniality, and natural flair for improvisation have always made her a welcome addition to any movie or television show, even when trapped in limited supporting roles. For "Return to Me," Hunt graduates to the director's chair (also co-scripting with gifted performer Don Lake), helming a crushingly sweet and genuine tale of coincidence, magic, and love, but also managing to keep the laugh count high. Cynics aren't allowed past these gates, as Hunt shoots straight from the heart, working diligently to keep the picture as approachable and lived-in as possible, effortlessly translating her skills with timing and authenticity to the screen with this outstanding charmer. Read the rest at Blu-ray.com