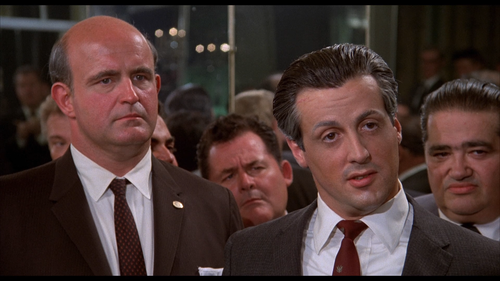 Before "Rocky," Sylvester Stallone was just an average working actor in Hollywood trying to make a living. After "Rocky," he was transformed into a screen legend, riding a reputation as a cinematic hero to box office success and Oscar gold, making him one of the biggest stars of the 1970s. The follow-up to his little movie that could was 1978's "F.I.S.T.," a feature that attempts to deliver a disquieting look at the rise of the labor movement in America, co-scripted by Joe Eszterhas (his first produced work) and directed by Norman Jewison. With Stallone's participation, "F.I.S.T." is more of a light slap when it comes to challenging methods of union influence, instead trying to find heroism in this thinly-veiled take on the Jimmy Hoffa story. Numerous elements flatline in the film, but Jewison does pull a fine performance out of Stallone, padding the picture with enough talent and sequences of fiery indignation that propel the overlong, undernourished effort along. Read the rest at Blu-ray.com