Blu-ray Review - At the Earth's Core 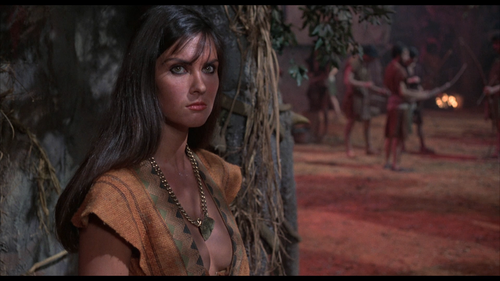 With the movie industry on the prowl for adventure stories during the 1970s, the work of Edgar Rice Burroughs was mined on several occasions, with director Kevin Connor leading the filmmaking charge on efforts such as "The Land That Time Forgot" and "The People That Time Forgot." "At the Earth's Core" was Connor's second round with Burroughs, with the 1976 endeavor using established creative momentum to plunge into the center of the planet, meeting all types of monsters and mayhem while keeping star Doug McClure employed as the go-to guy for Burroughs-inspired heroism. A B-picture with wonderful passion for the material, "At the Earth's Core" has its issues with pace and repetition, but it's immense fun at times, utilizing creative special effects and spooky villainy to support a run of gallantry and primal survival sequences, using the novel's influence to jumpstart an endearingly set-bound extravaganza that, at one point, features a fire-breathing frog. It's impossible to deny a movie that favors such a bizarre sight. Read the rest at Blu-ray.com