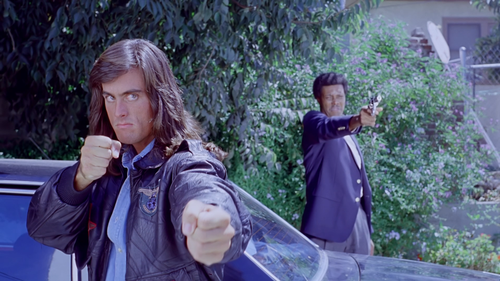 There has to be a story behind "Samurai Cop." There are always stories when movies are this insanely bad. B-cinema welcomes a new contender with this 1991 endeavor, which attempts to marry martial arts cinema with buddy cop clichés, hoping to give birth to a new action hero in star Matt Hannon. With glam rock hair and a gym rat body, Hannon is a force of one in "Samurai Cop," doing his best to generate screen mayhem while writer/director Amir Shervan botches every possible technical challenge of the movie. The result is no-budget, brain-dead thriller that doesn't contain a single scene of filmmaking competence. To some, it's bad movie heaven, huffing the fumes of a botched effort that doesn't even bother to make sense. For everyone else, the feature is merely acceptable as a curiosity, permitted a rare chance to view futility in motion as Shervan labors to hold the whole wacko thing together. Read the rest at Blu-ray.com