Blu-ray Review - Planet of the Vampires 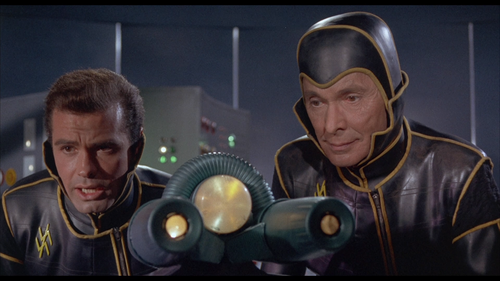 Without a genre mentor to guide me during my formative moviegoing years, I stumbled on the work of director Mario Bava almost by accident. It was a viewing of "Danger: Diabolik" on "Mystery Science Theater 3000" that opened my eyes to the helmer's work, watching the rare movie on that masterful program that dodged the riffing, revealing itself to be an inventive, charmingly loopy effort with a distinct period vibration. 1965's "Planet of the Vampires" isn't Bava's best picture, but it provides another portal into an unknown world, boasting visuals that are remarkable in their originality and homegrown construction, mirroring "Danger: Diabolik" in the way it takes absolutely nothing and creates an entire world in-camera, highlighting brilliant design achievements and sheer ingenuity. While Bava possesses a filmography filled with highlights in horror, his most fertile work seems to emerge beyond the demands of terror, unleashing his imagination in full. Read the rest at Blu-ray.com