Blu-ray Review - Married to the Mob 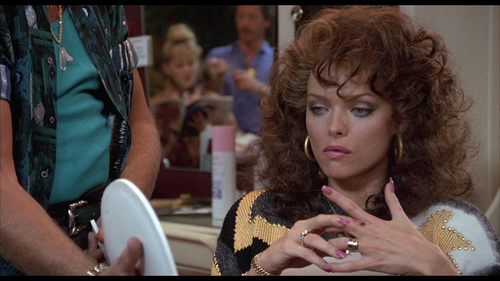 Jonathan Demme currently enjoys one of the most unpredictable careers in the industry, a position of defiance and creativity he's held for the past four decades. He's perhaps best known for his disturbing way with 1991's "The Silence of the Lambs," a masterful film that showered Demme with awards and amplified his career with significant box office. Less is understood about his work in comedy during the 1980s, with efforts such as "Melvin and Howard" and "Something Wild" developing an unusual but snappy sense of humor. 1988's "Married to the Mob" is the most successful of the bunch, if only because it takes a tired subject in the mafia and does something original with working parts concerning violence and law enforcement. It's an oddball picture, playful and sharp, keeping Demme on task as he navigates stereotypes and romantic comedy urges, working toward an overall lightness to a tale that's pitch black at times. It's a tonal gymnastics display that doesn't come around very often, making "Married to the Mob" special, assisted in great part by Demme's askew vision for this type of story. Only this helmer would make a mob comedy and score it to New Order songs. Read the rest at Blu-ray.com