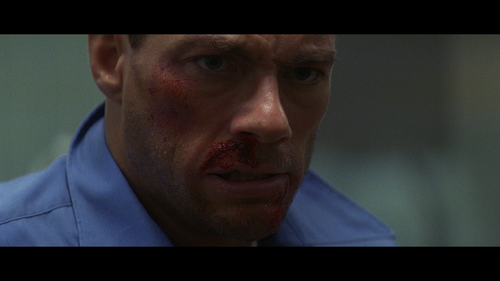 1988's "Die Hard" was an influential action extravaganza that spawned countless imitators, creating a subgenre with a league of "Die Hard in a…" variations that gave action heroes of all shapes and size a chance to show off their screen fury. Perhaps the most famous of the knockoffs was 1992's "Under Siege," which pitted Steven Seagal against terrorists onboard a battleship. Not wanting to be left out of the trend, Jean-Claude Van Damme received his own one-man-against-many vehicle with 1995's "Sudden Death," a "Die Hard in a Hockey Arena" endeavor that reteamed the star with director Peter Hyams. Fresh off the success of their 1994 collaboration, "Timecop" (the highest grossing film for both men at the time), "Sudden Death" was meant to extend the celebration, with Van Damme sweating through a routine thriller that held the distinction of being the rare actioner set during the Stanley Cup Finals. Of course, a decent script wouldn't have hurt, but the production invests more in explosions and atypical hostility toward children, rendering the feature more numbing than inviting, leaving a bitter aftertaste. Instead of scoring with a surefire premise, "Sudden Death" follows the title's direction, keeling over before game even begins. Read the rest at Blu-ray.com