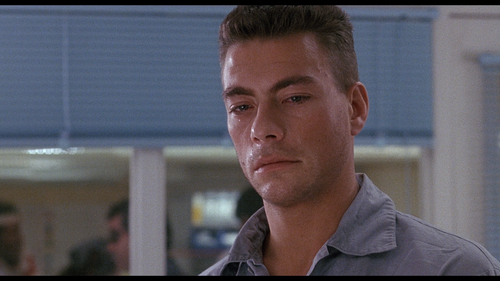 Around 1990, Jean-Claude Van Damme was just breaking through with American audiences, finding modest but unexpected grosses for 1989's "Kickboxer" and "Cyborg" suggesting viewers were interested in this odd action hero. Looking to expand his limited repertoire, Van Damme cooked up 1991's "Lionheart," taking a story credit on an old-fashioned melodrama about a good-guy fighter trying to do the right thing by his family and friends. The experiment is successful to a slight degree, offering the star an opportunity to portray other emotions besides teeth-gnashing rage, while director Sheldon Lettich does his best to keep the endeavor light on its feet, mixing face-pounding action with sensitivity. Nobody will mistake "Lionheart" for a Disney movie, and while the picture does retain severe limitations, it remains an engaging ride for Van Damme fans, with plenty of kicks to please the faithful while inching the actor's abilities along, allowing him to cry and interact with children between fierce beatdowns. Read the rest at Blu-ray.com