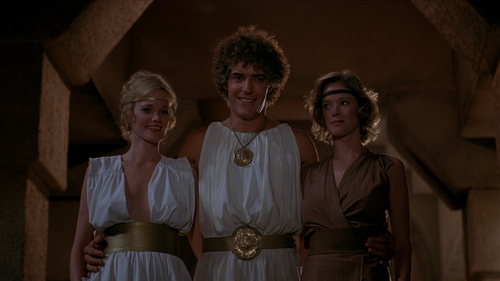 The late 1970s and early 1980s were a fruitful period for sword and sorcery films. With the popularity of "Dungeons & Dragons" and the success of "Conan the Barbarian," producers raced to put out product that featured men covered in baby oil swinging broadswords, backed by gnarly creatures and magical events. 1982's "Sorceress" was born from such monetary frenzy, with producer Roger Corman hoping to add his own spin on the fantasy subgenre, only his take wouldn't feature a bodybuilder, but female twins. Playmates to be exact, with Leigh and Lynette Harris taking on the starring roles in this limited but highly amusing romp, bringing thespian determination and a lack of clothing to the party while director Jack Hill (working under the pseudonym "Brian Stuart") struggles to maintain his sense of humor as Corman imposes his famous frugality and desire for exploitable screen elements on the unconventional helmer. Read the rest at Blu-ray.com