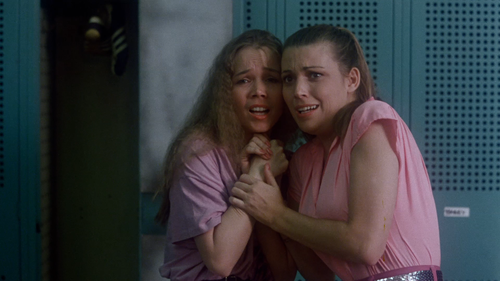 It's hard to hate any horror movie that opens at a track meet and welcomes viewers with a disco theme song. 1981's "Graduation Day" arrived in a crowded marketplace, with dubious producers scrambling to cash in on the success of 1978's "Halloween," with their lust for cheap and easy profit renewed when 1980's "Friday the 13th" hit the box office jackpot. Horror was hitting hard and fast during this period, with overall creative quality less of a priority. While "Graduation Day" isn't an awards contender, the Herb Freed-directed chiller has a little more interest in cinematic pursuits than much of its brethren, offering audiences a traditional offering of slasher entertainment, with victims pierced and gutted by a variety of weapons, but done so with a raw style that fixates on pace, not prolonged suffering. It's completely goofball stuff, but engaging and, at times, exciting, giving a notoriously lazy genre a firm towel snap as it strives to turn a minimal budget into a nail-biter. Read the rest at Blu-ray.com