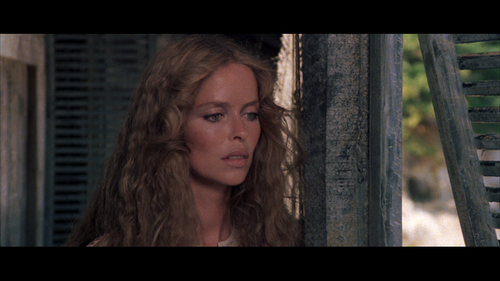 "Screamers" is an entertaining adventure/horror picture, but its behind-the-scenes saga is even better. Produced in 1979, the Italian release was titled "Island of the Fishmen," offering mild thrills for younger audiences craving a monster movie without the pressure of extreme violence and other R-rated pursuits. Roger Corman purchased the distribution rights for America, ordering director Miller Drake to spruce up the effort with extreme gore, playing more directly to drive-in customer appetites. Drake created an epilogue starring Cameron Mitchell as a sea captain who escorts a couple (played by Mel Ferrer and Eunice Bolt) to a forbidden island, aiding their search for treasure, only to be gobbled up by ghoulish mutant fishmen. When this cut of the film, now titled "Something Waits in the Dark" didn't go over well, Corman's crew (primarily Jim Wynorski) cooked up a trailer that emphasized a cinematic centerpiece featuring a human turned inside out. Of course, no such scene existed in the movie, but nobody comes between Roger Corman and a dollar, with the refreshed advertising pushing the newly retitled "Screamers" into profit, eventually incurring the wrath of angry ticket buyers. Read the rest at Blu-ray.com