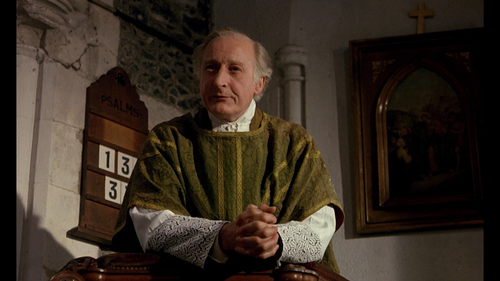 In an attempt to rile up religious forces, director Pete Walker fumbles the basics of suspense cinema in 1976's "House of Mortal Sin" (a.k.a. "The Confessional"). It's not that the picture is a disaster, far from it, but the helmer is clearly out to provoke with this story of sin and murder, turning a respected Catholic priest into a stone-cold killer. Walker is begging for publicity with this one, but the movie doesn't earn is rabble-rousing intent, moving forward as a thriller that features some inventive violence, strong performances, and a perfectly acceptable message on human nature, only to lose potency with painful overlength and a bizarre choice to identify the antagonist right away, thus abandoning any hope for a proper mystery. In the end, there are more pros than con with "House of Mortal Sin," but Walker feels constipated with this effort, unsure if he wants to court controversy or make a cracking chiller. Read the rest at Blu-ray.com