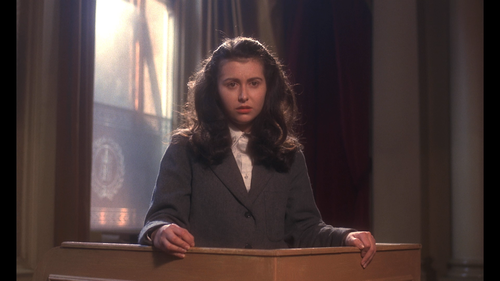 The concept of the meet cute takes a creepy turn in "Home Before Midnight." When we meet our lead characters, Ginny is hitchhiking down a quiet road, soon stopped by Mike, who's driving along in his car. He offers her a lift, she naturally hesitates, concerned with the prospect of riding with a single man. Mike, in his infinite wisdom, cracks a rape joke to lighten the mood. Ginny responds not with a crescent kick to the throat, but with a laugh, and quickly slips into the car. This is true love, folks, at least the 1979 British kind from director Pete Walker, who attempts to step away from his routine of terror films to make a sensitive drama about the trials and tribulations of romancing an underage girl. In a way, Walker remains in the horror genre, but instead of displaying blood and guts, "Home Before Midnight" traffics in lies and urges, asking the audience to judge these characters alongside the rest of their community. Read the rest at Blu-ray.com