Film Review - A Million Ways to Die in the West 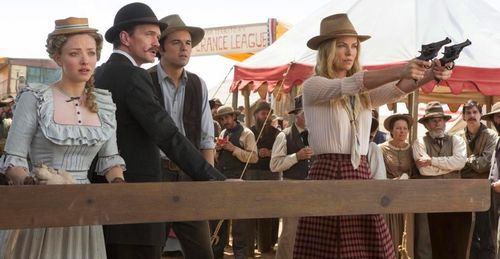 Seth MacFarlane generally does one thing, and he does with occasional inspiration. After years building his animation empire with “Family Guy” and “American Dad,” MacFarlane tried out live-action filmmaking with 2012’s “Ted,” a lewd, crude comedy with pleasingly bizarre acts of mischief wedged between the helmer’s obsessive need to shock and awe with his juvenile sense of humor. After experiencing a global box office smash, MacFarlane quickly returns to screens with “A Million Ways to Die in the West,” a western parody that makes “Blazing Saddles” look like a Noel Coward play. Limited in scope and silly business, the feature plays directly to MacFarlane’s fascination with poo-poo, pee-pee humor, without ever moving beyond the basics of sophomoric gags to transform into the raging farce it sporadically hints at becoming. Read the rest at Blu-ray.com