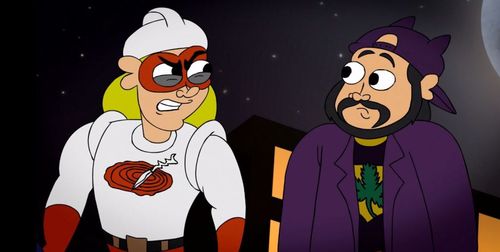 Although he’s already celebrated the end of the View Askewniverse, and even threatened to retire from filmmaking altogether, Kevin Smith can’t seem to quit his most enduring creation. Last seen onscreen in 2006’s “Clerks II,” Jay and Silent Bob return to the realm of animation for “Jay and Silent Bob’s Super Groovy Cartoon Movie,” a low-budget affair that plays directly to the Smith fanbase with copious amounts of inside references, crude humor, and weed-scented shenanigans. It’s easy to dismiss the softball screenwriting, but there’s a definite speed to the picture that’s encouraging, sprinting through bits of awful humor in an irreverent manner befitting these stoner superheroes. Read the rest at Blu-ray.com