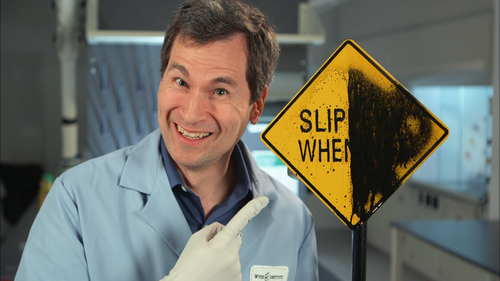 Credited as a "technology columnist and best-selling author," David Pogue is one animated guy. He's the host of "Making Stuff 2," a follow-up to his lauded 2011 series for "Nova," once again embarking on a journey around the globe, now on the hunt for scientific breakthroughs born from "Wilder," "Colder," "Safer," and "Faster" exploration. The goal of the series is to display the enormity of human ingenuity that remains active, with geniuses and ambitious types searching the natural world for inspiration that could possibly fuel innovation, with many of the visits concerning radical changes in bioengineering. The result is an entertaining show that values a sense of discovery, allowing the viewer to find excitement as experimentation unearths surprising results, creating a more advanced scientific viewpoint. The series is also comedic and slickly edited, making sure accessibility greets even the most complex theory. Pogue works to maintain dignity about the work, but he's not above a cartoon moment or two. Read the rest at Blu-ray.com