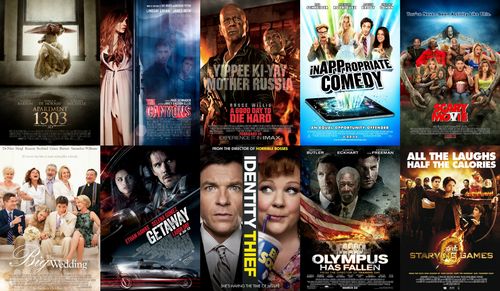 With a cast that included Robert De Niro, Susan Sarandon, Diane Keaton, Robin Williams, Amanda Seyfried, Topher Grace, and Katherine Heigl, clearly something positive should’ve emerged from this production. Instead, “The Big Wedding” was crippled by a pitiful screenplay and inert direction from Justin Zackham, who turned a riotous wedding weekend comedy into a slog of tedious melodrama and painfully ill-conceived gags. Unendurable despite its thespian pedigree, “The Big Wedding” disproved the star power theory, as filmmaking this wretched and juvenile is actually capable of taking down anyone foolish enough to accept the challenge.

A sketch comedy endeavor created by Vince “The ShamWow Guy” Offer, starring Lindsay Lohan, Adrien Brody, Rob Schneider, and Michelle Rodriguez. Oof. Attempting to register as politically incorrect side-splitter, “The InAPPpropriate Comedy” was a trainwreck of bad ideas, unfunny actors, and obviously staged hidden camera bits (Ari Shafir’s “The Amazing Racist” sequences being the most flagrant offender). To make matters even more uncomfortable, the opening of the picture established the whole feature as taking place inside Lohan’s vagina. I repeat: Oof. Perhaps Offer can sell water to a drowning man, but as a filmmaker, he’s comedy poison.

Director Paul Schrader and screenwriter Bret Easton Ellis set out to create an ode to life in the corrosive reaches of Los Angeles. Without much of a budget and suffering from a case of casting paralysis, the team ended up with “The Canyons,” a stillborn odyssey of sex and power starring Lindsay Lohan and adult film standee James Deen. A glum soap opera unable to be saved by the substantial limitations of its cast, the picture submitted a strange sense of disinterest from its creators, who failed to concoct even the simplest scene of tension, preferring to use nudity and idiotic schemes of cruelty to revive this corpse of a feature. Although bombarded with bad press before its unceremonious opening, “The Canyons” lived up to its pre-release scorn, effectively tarnishing Schrader’s career highlights.

The moviegoing public was treated to two White House takedown extravaganzas this year. While Roland Emmerich’s “White House Down” was goofy bore, “Olympus Has Fallen” was a shockingly aggressive and numbskulled endeavor that tried to shock its audience into submission. Lifting scenes wholesale from “Die Hard” while trying to create the illusion that the actors gathered here actually cared about their work, “Olympus Has Fallen” was like a long lost, R-rated Ernest sequel, only instead of Jim Varney there was Gerard Butler, stumbling through the picture with a suspicious blankness, putting his faith into Antoine Fuqua’s direction, which primarily consisted of staging explosions, arranging cartoonish depictions of villainy, and deafening viewers with ultraviolence. The producers are threatening to commence production on a sequel. Let’s hope for a hard drive failure in the interim.

Ethan Hawke in bad-ass mode. Selena Gomez as a gun-wielding, streetwise woman. From the director of “Dungeons & Dragons” and “An American Haunting.” It’s not like the general rancid quality of “Getaway” was a surprise. A dim-witted actioner, whipped into an artificial frenzy by spastic editing, the feature disposed of logic and timing to speed ahead as an adrenaline rush of hackneyed stunts and Crayola screenwriting. Morally confused, dreadfully acted, and executed with a steely sincerity that bordered on mental illness, “Getaway” aimed to thrill its audience, but it mostly invited them to nap.

A mainstay of yearly Worst Of lists, filmmakers Jason Friedberg and Aaron Seltzer returned to the creative basement with “The Starving Games,” another one of their “parody” pictures that spent more time simply reminding the audience of pop culture blips than mounting anything truly satiric. This extended riff on “The Hunger Games” was devoid of laughs (of course), reliant on bathroom gags (of course), and visually unpleasant (of course), barely qualifying as an actual movie. Dreadful in every way, the directing duo continued to pollute theaters with their ricin-laced sense of humor. Worse, there’s no indication they’ll stop anytime soon.

Another parody explosion for 2013, “Scary Movie 5” managed to torpedo whatever goodwill was left in this exhausted franchise. Handling directorial duties was Malcolm D. Lee, and his flat filmmaking style did little to bring out the merriment of these silly pictures. Instead of genial nonsense, Lee elected for punishment, working up a sweat trying to make D.O.A. sequences click as designed, while the disorganized nature of the enterprise resulted in more of a scattergun viewing experience that quickly escalated into moviegoing torture. There were no laughs here or even interesting targets for mockery. Instead, “Scary Movie 5” rode trends and navigated the novelty of new releases to tickle the crowds. It’s a shame none of it worked. Weirdly, Lindsay Lohan appeared in this effort as well. I’m sensing a pattern emerging.

Perhaps too obscure a title to properly spank, “Apartment 1303” was notable for being one of the most poorly acted pictures of the year, with stars Mischa Barton and Rebecca De Mornay turning in career-worst work in this moronic ghost story. Incompetent all around, the feature did away with the essentials of storytelling to stage cheap, fruitless scares, rendering the plot nearly incomprehensible and the drama inert. Silly but insufferable, “Apartment 1303” also holds the distinction of being 2013’s lamest horror title.

Jason Bateman is a funny guy. Melissa McCarthy is a hilarious woman. Yet, somehow the mix of the comedians resulted in “Identity Thief,” a severely humorless effort that boldly submitted loathsome characters for leads, asking the audience to welcome repellent behavior for 90 minutes before shifting into syrup (a turn completely unearned) for the dismal finale. The actors deserved better material, especially McCarthy, who’s capable of so much more than the tired Chris Farley shtick she’s currently employing to make her fortune.

A Good Day to Die Hard

While it technically isn’t one of the worst films of the year, “A Good Day to Die Hard” deserves a spot on this list due to its crushing, swear-off-Bruce-Willis-forever disappointment. While the previous sequel, 2007’s “Live Free or Die Hard,” was a master class in mediocrity, the latest chapter in the once masterful “Die Hard” series was drab, excessive, and hideously directed by noted hack John Moore. This was spectacularly lazy work with a half-asleep star going through the motions to collect a fat franchise paycheck, destroying the brand name to a point where the idea of another installment floods me with depression, not finger-twiddling giddiness. “Die Hard” is now officially dead. Yippie Ki-Boo-Hoo.

Also of Note: The ABCs of Death, Texas Chainsaw 3D, Escape from Tomorrow, Walking with Dinosaurs, Grown Ups 2, A Madea Christmas, Aftershock, 21 & Over, Movie 43, Now You See Me, A Haunted House, All Superheroes Must Die, The Purge, Trance, Generation Um, Plush, Escape from Planet Earth, Spring Breakers, At Any Price, and Diana.