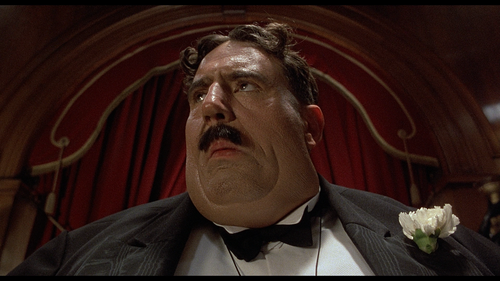 After the success of narrative-driven films such as "Monty Python and the Holy Grail" and "Life of Brian," it seems regressive for the lauded comedy group (including Graham Chapman, Michael Palin, Terry Jones, Eric Idle, John Cleese, and Terry Gilliam) to return to their sketch-show origin with "The Meaning of Life." Building momentum with fantastic adventures through history and religion, Monty Python's 1983 endeavor has a noticeable lack of energy and almost no cohesion about it, stumbling around big ideas on life and death with all the concentration of a group on the brink of going their separate ways. It's a hit-or-miss effort that features all the hallmarks of the team's work, offering rich design elements, puckered animation, gross-outs, and crack comic timing. Despite its obvious shortcomings, "The Meaning of Life" also happens to be devastatingly funny at times, hitting a few beats of silliness with traditional Python precision -- terrifically loony moments that manage to salvage the entire viewing experience. Read the rest at Blu-ray.com