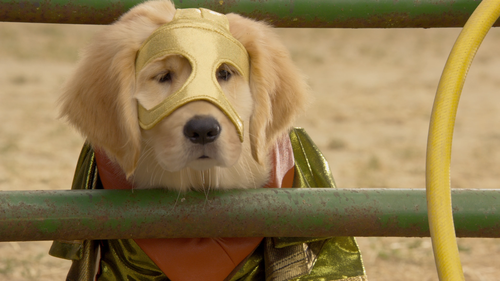 It's hard to believe this all started with "Air Bud." The 1997 picture has spawned a series of sequels and spin-offs that have transformed a simple tale of a basketball-shooting pooch into cash cow for Disney, who issue a DTV production every year, using the power of puppies to latch on to whatever trend is happening in Hollywood. The dogs have met Santa, searched for buried treasure, and enjoyed Halloween, but now it's time to suit up in spandex and save the world. "Super Buddies" is the latest in the "Air Buddies" franchise, working with visual effects to turn everyone's favorite canine pack into caped crusaders, protecting lovable humans from an intergalactic threat. As these things tend to go, kids won't mind the light action and mild jesting, with the whole production played in an exhaustively cartoon mode to avoid the burden of actual screenwriting. Older viewers may not be as patient, though "Super Buddies" could be of use to die-hard comic book cinema fans unable to wait for the next Marvel or DC endeavor. Read the rest at Blu-ray.com