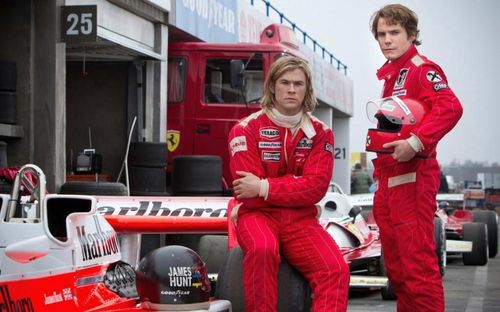 It’s a little weird to find mild-mannered director Ron Howard behind the wheel of “Rush,” even though he has plenty of experience filming fast cars, having kicked off his helming career with 1977’s “Grand Theft Auto.” It’s just that spinning wheels and revving engines aren’t expected out of him these days, coming off mild comedies (“The Dilemma”), blockbusters (“Angels & Demons”), and Oscar-bait (“Frost/Nixon”). “Rush” represents a change of pace for Howard, who sinks his teeth into an R-rated Formula One race drama, giving this volatile material an edgy concentration that’s uncommon. It’s a nervy movie, supported by two exceptional performances from Chris Hemsworth and Daniel Bruhl, who show a commitment to character dignity and the unsteady steps of blossoming respect, making only spare use of overpowering cliche. Read the rest at Blu-ray.com