Film Review - Metallica: Through the Never 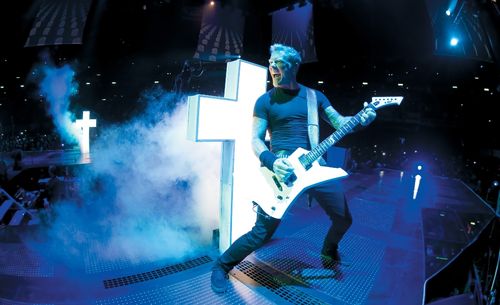 It’s tough out there for a concert film these days. Ever since Miley Cyrus brought Hannah Montana to box office gold in 2008, Hollywood has been chasing the big money with efforts devoted to The Jonas Brothers, Katy Perry, Justin Bieber, and One Direction. The genre receives a much needed kick in the behind with “Metallica: Through the Never,” a blistering performance picture that blends riotous stage action with an actual street riot, while asking fans to digest a heaping helping of surreal imagery. Its buzz saw execution is magnificent, making sure the audience exits the theater with melted brains and blood pouring out of their ears, but director Nimrod Antal (“Predators,” “Vacancy”) leaves the movie with more than a few question marks, which probably isn’t the best course of action to take when dealing with such a blunt cinematic instrument. Read the rest at Blu-ray.com