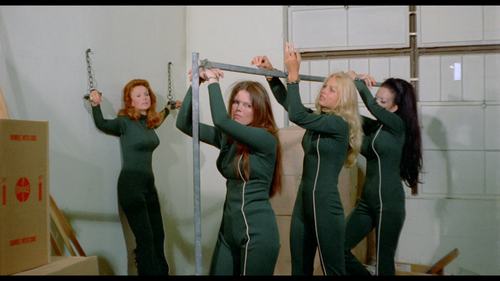 1973's "The Doll Squad" has all the ingredients for a rollicking B-movie viewing experience. We have a diabolical villain bent on world domination, a team of bikini-wearing secret agents brandishing cartoony weapons, and a taste of chunky 1970's action choreography to sell the hysteria. It's an ideal blend of escapist elements and a film some suggest was a clear inspiration for the jiggling juggernaut known as "Charlie's Angels." However, as enticing as "The Doll Squad" is, it's also a strangely airless endeavor that's hampered by its no-budget ambitions, finding writer-director Ted V. Mikels striving to make his own Bond movie with mere pennies to spend, forced to rinse and repeat every single scene. There's gold in the corners of the effort, but it takes considerable patience to find the highlights of this strangely chaste, frustratingly repetitive picture. Read the rest at Blu-ray.com