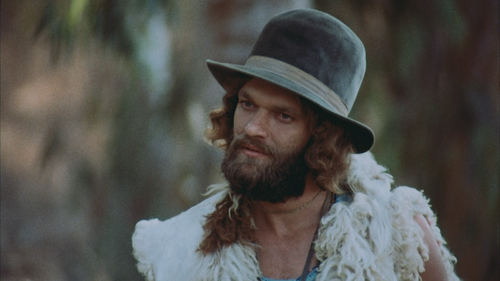 "An American Hippie in Israel" isn't most subtle of titles, and its opening scene doesn't mess around with subtext. In a field of flowers, we see a steamroller making its way across the land, crushing natural beauty with its steely, heavy might. Amos Sefer's 1972 allegorical extravaganza announces its tone right up front, leaving little to the imagination as its threadbare plot and impulsive performances take over. It's been branded one of the worst films of all time by the guardians of cult cinema, and it certainly has enough clunky moments to merit such hyperbolic consideration. However, for all the nonsense and pull-your-hair-out padding that's included in the feature, Sefer has a weird vision for "Hippie" that almost works if one squints hard enough, attempting to make an anti-war picture that's soaked in oddity and nudity. It's an admirable effort, with periods of floppy B-movie shenanigans that are surprisingly entertaining. Read the rest at Blu-ray.com