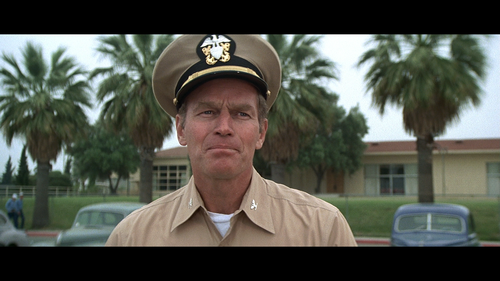 Although positioned as a blockbuster release in 1976, "Midway" is more of a unique experiment in war film construction. While budget considerations obviously factored into the decision, famed producer Walter Mirisch decided to use archival footage and scenes from other movies to help generate the necessary expanse to this World War II effort, mixing the modern with the past, introducing the feature with the proclamation: "This is the way it was." Well, technically, some of it wasn't, but that doesn't stop "Midway" from rolling forward as a movie primarily interested in naval stratagem, aiming for a balanced portrait of intelligence and instinct as the U.S. and Japan moved their animosity to the heart of the Pacific Ocean, treating the empty space as a chess board, embarking on a pivotal moment in WWII history. To hedge his bet, Mirisch hires an exceptional ensemble of famous faces who sink their teeth into the opportunity to play historical dress-up, keeping what's actually a very deliberate picture alert with well-oiled thespian confidence. Read the rest at Blu-ray.com