Film Review - Behind the Candelabra 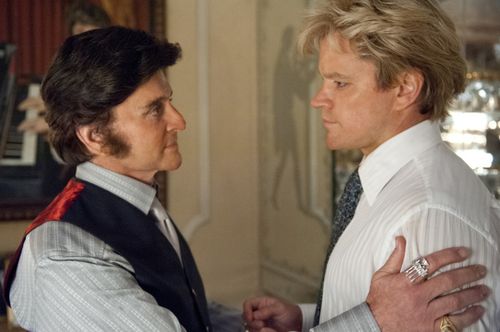 As repeatedly reported in pre-release press, “Behind the Candelabra” represents the last feature film Steven Soderbergh plans to direct before entering a period of retirement nobody believes will last for long. On the off chance he actually follows through on this threat, “Behind the Candelabra” is an apt farewell for the frustrated moviemaker, who tackles a controversial script teeming with sordid details and cruel behavior, out to strangle the legacy of gaudy showman Liberace, viewed here a monster-in-the-making. Although a glacial pace ultimately undermines the passions of the characters, the picture does supply tangy performances from stars Michael Douglas and Matt Damon, who sink their teeth into the unsavory business of love gone wrong, captured by Soderbergh in a distracted manner that hints more at auteur fatigue rather than industry frustration. Read the rest at Blu-ray.com