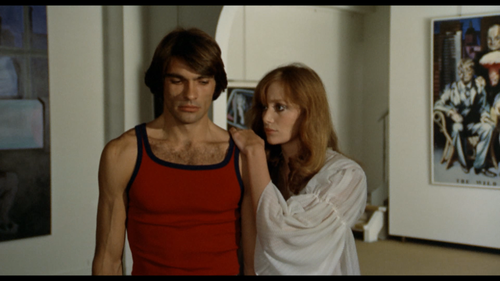 My education in the work of director Fernando Di Leo has primarily consisted of watching stoic men go about the daily business of murder, punctuated with the occasional feminine distraction and staring contests between antagonists. The ominously titled "Shoot First, Die Later" contains many of the same elements as before, happily showing off the hardness of character Di Leo built a reputation on. Heck, this movie opens with one of the villains ordering a mass murder of local dim-wits, with the camera enjoying the view of a gunman blasting away at the vulnerable legs of his victims. However, this 1974 feature is perhaps the strongest, most penetrative effort from the maestro I've seen to date, revealing an unexpectedly potent emotional core and richly defined moral struggle, giving the harsh violence and chest-puffing genuine meaning. It's a marvelous picture, spotlighting roughhouse action and a leather-jacket score, while reinforcing Di Leo's iconic status as a crime film craftsman tackling a challenging study of duality and honor. Read the rest at Blu-ray.com