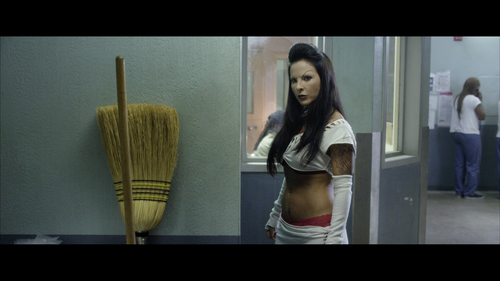 "K-11" marks the directorial debut for longtime script supervisor Jules Stewart, though she's probably best known as the mother of "Twilight" superstar and famed stammer queen Kristin Stewart. Only able to talk her kid into a voice cameo for her first helming gig, Stewart is left without star power and a decent budget to bring her prison epic to life, with only a few tricks, some unusual sexual tension, and an overabundance of quirk and chaos to help sell her vision to the audience. "K-11" is an odd feature and it's rarely a successful one, sweating up a storm to come off edgy and unconventional. Tonally unsteady and dramatically asthmatic, the picture is only moderately tolerable due to few technical strengths and a key role played by Kate del Castillo, who manages to make a slight supporting turn into a grand display of camp, menace, and cockeyed sex appeal Stewart should've made the focus of the entire film. Read the rest at Blu-ray.com