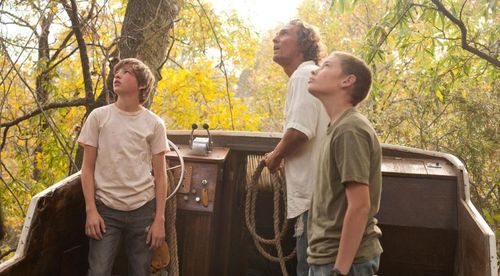 The power of great cinema is a special thing. With “Mud,” the screening audience I attended the film with fell in love with the picture, physically and verbally invested in story and character to a degree I haven’t been exposed to in a very long time. It was a unique moviegoing adventure for a classically conceived effort, standing somewhere between a Mark Twain novel and a David Gordon Green feature (at least one where he’s not trying to be funny). Somber and engrossing, “Mud” is like paging through a terrific book containing a few dull chapters, with writer/director Jeff Nichols (“Take Shelter”) creating an evocative atmosphere of mystery and misfortune, captured through well-rounded personalities, patient screenwriting, and ace acting from most of the cast. Read the rest at Blu-ray.com