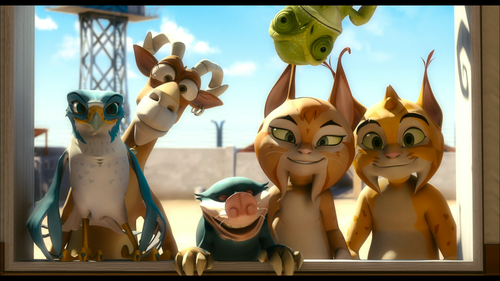 We see this type of production pop up every now and again. Trying to compete with Hollywood animation factories like Disney and Dreamworks, independent studios typically have a devil of a time trying to get a foothold into the global market, often faced with lackluster budgets and wheezy scripts as they cook up colorful CG-animated antics for the kiddies. A Spanish production presented and produced by Antonio Banderas, "The Missing Lynx" is similar to releases such as "The Wild" and the recent "Escape from Planet Earth," attempting to drum up some excitement with little in the way of cinematic might, relying on frantic action, crude comedy, and artificial sincerity to make an impression with wee ones who'd gladly watch a test pattern if it included the promise of candy, soda, and popcorn. Exhaustively underwhelming and cheapy all around, "The Missing Lynx" isn't even passable babysitting fodder, asking children to sit through a routine adventure with anthropomorphized animals engaged in acts of panic and elastic derring-do. Read the rest at Blu-ray.com