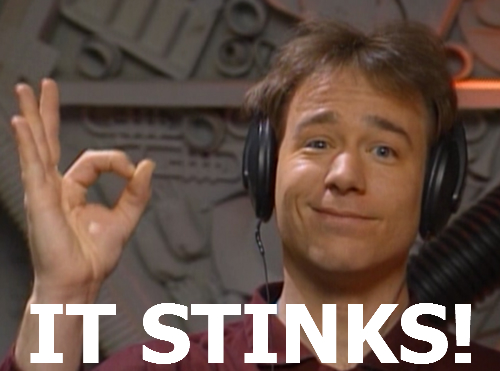 Your reviews read like they were written by an over paid douche bag.  But I'm guessing you're not over paid - or actually made of plastic - you just act that way,

seriously no offence ment, but you need to take your head out your ass .is your middle name pretentious auoto cratic mr nobody. christ man get a life.

brian, have you no joy in your life? seemingly only bitter cynicism.  i feel for you.  find some happiness you poor little child.

Sometimes friends of mine forward your reviews to me. Those people are no longer my friends.

I have read some of your reviews. You are a pompous piece of shit. Your picture gives me a queasy feeling in my stomach. The stench of douche that emanates from your hipster glasses and receding hairline make me wretch. Who the fuck thought you had any decent opinion about movies? Someone should find them and prevent them from making any more terrible decisions. People like you shouldn't be allowed to procreate.

Your review of this movie is an embarrassment to the film industry. It's rather obvious if you were capable of creating something remotely enjoyable, that you would be writing reviews for a legitimate establishment, instead of a GoDaddy.com $9 website that you created from your shitty one bedroom apartment. Notice that you were the ONLY person to give it a bad rating, and that writers from well known papers all praised the work? Feeling like an imbecile? Probably not, but that's primarily a result of your narcissistic and borderline retarded opinion. Which, granted, you are entitled to. But nonetheless, an absolute disgrace. Did someone tell you how shitty of a writer you were immediately before you watched this movie? Do us all a favor, and STOP WRITING REVIEWS.

How about you lighton up you prick. Saftey not guaranteed is a great movie you jerk. Get cancer.

All your reviews are rubbish, I've wasted a minute of my life to write this but its well worth it in comparison to the amount of time I could waste reading your drivel. Thanks. Bye.

I Am Number Four

I read your review of 'I Am Number Four

i disagree with you the invisible was a great movie. it made you feel for the each character.

In your review of the Three Stooges film you wrote, "The Stooges themselves often had trouble sustaining their breezy brutality for 90 minutes..."

I won't take issue with your evaluation of the film, that's certainly a matter of opinion, but what I do find troubling and unacceptable is  your assertion that The Three Stooges made 90 minute movies.

Their medium was the 20 minute short.

In fact, comparing apples to apples and Stooges to Stooges, the Three Stooges featured in the film that you reviewed made exactly ONE full length movie in which Moe, Larry and Curly appeared in starring roles. One.

Their fame and their acclaim was achieved by way of the 190 shorts they made at Columbia Studios.  Period.

There were compilations made to cash in on their latter day TV popularity - a grand total of three - and less than a handful of awful full-length films made more than 20 years after Curly's death starring Moe and Larry who by that time were senior citizens and as such, less than half-shells of their former selves, and an equally aged and distinctly untalented Curly substitute who brought nothing to the game except a bald head and a beating heart.

Let's face it, you outted yourself as someone completely unfamiliar with anything other than a vague conception of three guys doing slapstick in black and white films a long time ago.

With that truth now on the table, is it any wonder that you found the proceedings in the new release unfunny?  Add to that, the profile picture of your unsmiling, stick in your ass pose, and your negative evaluation of Three Stooges movie was a foregone conclusion.

And what have we learned?  Well, you might have learned that the Three Stooges made shorts, and did not struggle to sustain their "breezy brutality," for 90 minutes and hopefully you were also reminded of something I'm sure you already knew: when you write something for public consumption, don't assume anything.  Know your facts so that you won't get caught with pie (or in this case, shaving cream layered into a pie tin, on your stony face.)  Smile, life is short.  Short, as in a 20 minute film that ran before the main feature and which was phased out as double features became the norm during the '30's and '40's. 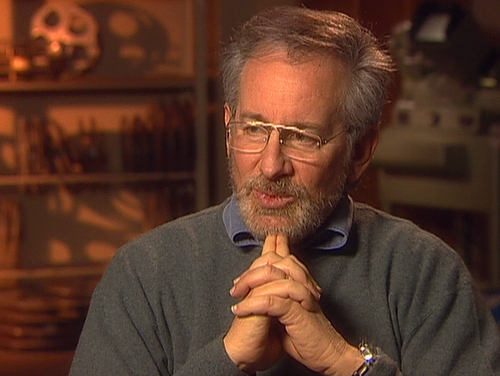 And the Steven Spielberg fingers-under-the-chin thinker of the year:

At 77 years of age I have lost all of my skills as a hockey player (I was pretty good up to 15 year4s ago).  You, on the other hand show no indication that you ever had any skill as a critic.  Your jarring appraisal of Ice Castles 2010 looks like an effort to prove that you really are a critic while the nonsense  belies the fact.  I have not seen the subject motion picture but your diatribe makes me think it might be worth-while seeing.  My wife and I rank the original as one of our favorites; we’ve probably seen it a half-dozen times and have enjoyed every minute.  Your lack of expertise regarding your appraisal of the entire 1978 movieconfirms your rather limited understanding of motion picture entertainment.

1) Barney hasn’t even seen the movie. He’s complaining about a review for a film he hasn’t even watched.

2) While I wasn’t overjoyed with the 1978 picture, I was somewhat kind to the effort in the review.