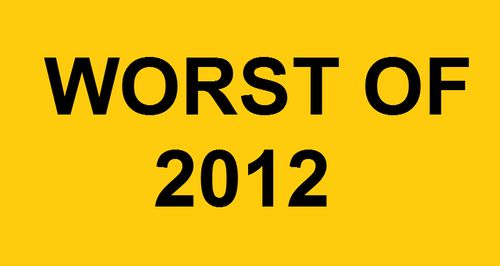 Twentysomething love without protection, SEALs in need of Strasberg, Tom Cruise vs. Bon Jovi, Billy Crystal’s bathroom routine, the hilarity of colon cancer, the lulz of internet horror, McG and the game of love, a movie with a devil of a non-ending, and a brutal pair of Perrys. These are the worst films of 2012.

Tyler Perry is an easy target for any worst-of list, yet “Madea’s Witness Protection” represents a particular low for the odious filmmaker, who not only makes a rancid comedy highlighting the most irresponsible impulses of his cash machine character (this time advocating domestic violence), but effectively erases any interest in co-star Eugene Levy’s future endeavors. Rotten to the core, Perry’s mind-numbingly robotic work on this dud accurately captures his creative void, content to scream stupidity at his audience instead of taking the time to generate a satisfying sense of screen chaos with his cross-dressing, pan-wielding ways.

A filmmaker failing to accurately shape the depth of a lovelorn twentysomething woman is a common occurrence in cinema today. “Lola Versus” goes one step farther by making the titular heroine exceedingly unsympathetic. Actually, she’s borderline loathsome at times, devoid of even basic intelligence and reasoning skills. A woefully misguided relationship comedy, director Daryl Wein (working from a script he co-wrote with Zoe Lister Jones, who contributes abrasive supporting work) doesn’t have any particular goal in mind with the material, attempting to get by on trite indie film clichés and painfully obnoxious comedy.

Attempting to pass itself off as a realistic take on the heroism of Navy SEALs in our complex age of global terrorism, “Act of Valor” forgot to offer a credible screenplay, trained actors, and comprehensible cinematography. While I don’t challenge the validity of all the coded military interplay, the flaccid, knuckle-dragging plot is straight out of a droopy Chuck Norris actioner, only Chuck is a better actor than any of the monotone SEALs recruited to play the beefy action figures. A storytelling shambles, visually hopeless, and recklessly simplistic when it comes to the authentic dangers of the world we live in, “Act of Valor” is more confidant as a cartoon, not as a statement of courage. The heroes who actually serve in America’s armed forces deserve a better recruitment commercial than this crude film.

An amateur horror production, “Smiley” displays a level of genre incompetence that’s almost entertaining enough to sustain an entire sit. Almost. A dreadfully formulaic slasher experience dressed up as commentary on today’s reckless, internet-obsessed youth who destroy one another “for the lulz,” the feature is a wretchedly acted and crafted endeavor, though one that might’ve found some direction if it were actually directed. It’s embarrassing to watch co-writer/director Michael J. Gallagher struggle with every facet of this production, consistently in way over his head.

The Devil Inside (review)

It’s tough to be the lone movie out there without an ending, but “The Devil Inside” gives it try. Continuing the industry’s fascination with exorcisms and found footage horror, “The Devil Inside” ditches scares and tension to observe constipated performances and flog a faulty premise, hoping ticket buyers won’t mind enormous leaps in logic and a resolution that’s no resolution at all, but a cliffhanger meant to continue through online research. Oof. Bland, boring, and fraudulently marketed, the cluelessness of the entire effort was staggering to behold.

A Little Bit of Heaven (review)

It’s a romantic comedy about cancer starring Kate Hudson. Of course it’s awful. However, it’s amazing to watch just how wrongheaded “A Little Bit of Heaven” becomes, working to bend traditionally jubilant, kissyface genre highlights into a melodramatic story concerning the struggle for life, featuring a cameo by Whoopi Goldberg as God. The film accurately sums up Hudson’s woeful career thus far, reducing the once beaming actress to a rusted tear machine moping around a distasteful screenplay I’m convinced she didn’t actually read before committing to make it.

Director McG turns up the volume on this tonal miscarriage, preferring a blitz of inane comedy and action to a merry sense of mischief inherent to the premise. Overblown and underwritten, “This Means War” is entirely dependent on its leading trio of actors, yet without a drop of chemistry and timing, the entire picture is washed away by their halfhearted efforts, while McG cranks up the crotch wallops, deadly improvisations, and obvious soundtrack cuts to keep himself entertained. “This Means War” could’ve been something in another helmer’s care, but here it’s an admittedly colorful yet unbearably smug mess.

Turns out Tyler Perry doesn’t need to direct himself to make complete garbage, as Rob Cohen is equally skilled at guiding tone-deaf performances and sloppy acts of violence. Attempting to revive author James Patterson’s famous character for a fresh franchise of sleuthing, Cohen instead takes a needlessly aggressive approach, keeping the feature tasteless (offering a scene where a pregnant woman is murdered) and insufferably broad, turning a cat-and-mouse game with potential into a dreary professional wrestling match. Tyler Perry and Rob Cohen. Who honestly thought these two would make a dazzling team?

A respectable premise (pitting old school parenting chaos vs. new age methods of control) is cast aside so Billy Crystal can mug his way through a stream of bodily function gags and wheezy improvisations. Plastic sentimentality poisons the well, while director Andy Fickman conducts with carelessness, attempting to make this urine and vomit-soaked pile of clichés come off heartfelt for ideal four-quadrant appeal. Family audiences, you deserve better than this.

Stretching the “Mamma Mia” formula to feed a hair metal extravaganza filled with dreamers, losers, and Tom Cruise (in perhaps the worst performance he’s ever given), “Rock of Ages” is an embarrassing disaster for everyone involved. Even worse, a sizable chunk of the soundtrack isn’t even hair metal. Garish and poorly cast (star Julianne Hough just doesn’t have the voice for this style of singing), director Adam Shankman elects to supersoak the screen with big-haired excess, resulting in monstrously tone-deaf movie that grows increasingly irritating and wearisome as it stumbles along.