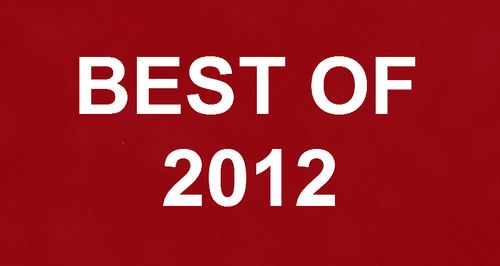 An Iranian uproar cooled by Hollywood fakery, a failed boy scout on the hunt for true love, fast food friction, the true price of greed, the slaughter of reality show stars, the quest to bring Osama bin Laden to justice, positive thinking put to the ultimate test, shaken and stirred, a mechanical best friend, and a visit to a nightmare factory via the woods. These are the best films of 2012.

With “Moonrise Kingdom,” writer/director Wes Anderson once again proves his excellence with stylized stories of longing and family. A beautiful ode to young adult fiction and the rough and tumble world of the boy scouts, the feature is stunningly photographed, masterfully designed with a pronounced Anderson fingerprint, and charmingly acted by the gifted ensemble. Anderson has developed into a formidable force of idiosyncrasy, making specific movies for a specific audience, in the vein of Woody Allen and Robert Altman. With “Moonrise Kingdom,” Anderson strikes a particularly irresistible balance between whimsy and adolescent wonder, spiked with a shot of deadpan humor and period fetishism that’s mesmerizing, creating a distinct identity (and spotless filmography) that’s impossible to resist.

Ben Affleck’s name was once synonymous with embarrassing tabloid headlines and mediocre movies. Today, he’s one of the finest directors around. After the Massachusetts misery of “Gone Baby Gone” and “The Town,” Affleck goes global and period with “Argo,” a sublimely tilted thriller that combines knowing Hollywood satire with nail-biting political unrest, generating a hostage drama that somehow remained unpredictable, despite its true story stamp. Smartly executed and generous with unbearable suspense, “Argo” brings Affleck the filmmaker (Affleck the actor is equally as persuasive) into clear view, continuing his astonishing career reinvention.

Writer/director David O. Russell captures the electricity of thought in “Silver Linings Playbook,” his ode to manic love and profound obsession, based on the novel by Matthew Quick. The feature’s balance of euphoria and distress is simply masterful, with Russell investing in character to pull off complex breakdown scenes and itchy familial dynamics. It’s an open wound of a film, though mindful of inaccessibility, dishing up audience-pleasing moments of dance floor release and tender human connection that are well-earned by Russell and his sublime dedication to the quaking power of positive thinking.

Kathryn Bigelow’s barnstorming take on the manhunt for Osama bin Laden is a rich tapestry of suspense, frustration, and intricate plotting, resulting in a sophisticated picture that’s bravely determined to inspect the underbelly of anti-terrorism efforts while sustaining a riveting political and emotional tension. Anchored by Jessica Chastain’s fierce work as the shell-shocked woman determined to bring bin Laden down, “Zero Dark Thirty” truly belongs to its gifted director, who brings a hauntingly thunderous quality to a story largely concerned with meetings and theories. It’s a masterfully crafted movie with an unexpectedly relentless pace.

For a franchise that’s been burning bright for 50 years now, the four-year gap between Daniel Craig adventures was enormous for fans of James Bond. “Skyfall” proves the delay was worth the wait. Genuinely epic, raw, and superbly crafted by director Sam Mendes, “Skyfall” provides Craig with his finest outing yet as the iconic character, while returning the series back to its roots of suave heroism and grand villainy. It’s always a treat to have Bond around, but when the results are this thrilling, it’s easy to get excited for the next 50 years of 007 activity.

Aiming for controversy, writer/director Bobcat Goldthwait achieves his goal with this violent comic fantasy. Confidently constructed with a brave tone of darkness to support its clearly satirical foundation, Goldthwait pulls off an amazing balance between horror and laughs, refusing to cop-out as this askew tale of friendship, pop culture disgust, and revenge makes its way to its triumphantly bonkers finale. It’s not a film for all tastes, and perhaps not an effort to cheer on as the U.S. deals with unimaginable tragedies involving firearms, but as caustic, gonzo entertainment goes for 2012, “God Bless America” was as close to authentically dangerous as it got, sold with a pronounced wink and an itchy trigger finger.

The Cabin in the Woods (review)

“The Cabin in the Woods” isn’t exactly a horror film, but it’s not a comedy. It’s something of a satire, but also a celebration. That the picture is largely indescribable is part of its charm, asking typically finicky genre fans to take a chance on this cheeky, violent thrill ride, near-brilliantly designed by screenwriters Joss Whedon and Drew Goddard (who also directs), who twist their adoration for all things nightmarish and clichéd into a loving ode to the traditional fright feature. “The Cabin in the Woods” is genuinely exciting moviemaking in a genre that’s usually half-asleep, best accepted with an open mind, an avoidance of spoilers, and an appetite for superlatively blood-soaked chicanery.

“Robot & Frank” emerges from unexpected directions, fusing together sobering dramatics surrounding the difficulties of aging and family management with a mildly futuristic tale of a man and his robot and the mischief they cause. Led by Frank Langella’s best work in ages, “Robot & Frank” captures an ideal tonal balance and sense of humanity as it goes about its strange business, with director Jake Schreier delicately shaping a surprising picture with a hearty sense of humor and a tough sense of realism in the midst of all the intriguing futureworld ornamentation and cultural warnings.

The Queen of Versailles (review)

2012’s best documentary supplies a potent message on the dangers of greed and the cheap thrills of excess. The world of David Siegel and his trophy wife, the unforgettable Jackie, is ideal fodder for a screen exploration, with director Lauren Greenfield handed access to the crumbling of a timeshare empire, the divide of a marriage, and the panic of destitution. “The Queen of Versailles” avoids cheap jokes to paint a disturbing portrait of unimaginable wealth taken to absurd extremes, with the journey articulated by the subjects themselves, who eagerly share their secrets and fears with Greenfield. It’s sickening yet highly amusing, moving beyond easy schadenfreude to capture the shock of the 2008 economic collapse in slow motion.

Rare is the film that causes genuine outrage inside a movie theater, where ticket buyers are compelled to yell at the screen and huff with disgust throughout the presentation. Leave it to “Compliance,” a picture about a real life prank call turned into a marathon of manipulation and humiliation, to pull an instinctual reaction out of typically subdued, popcorn-gobbling masses. An unusual odyssey of evil and gullibility that’s almost entirely rooted in fact, director Craig Zobel’s escalation of mischief and misconduct is exquisitely managed, with remarkable tension and a searing understanding of minimum-wage workplace behavior. Volcanic post-screening conversation is guaranteed with this one.