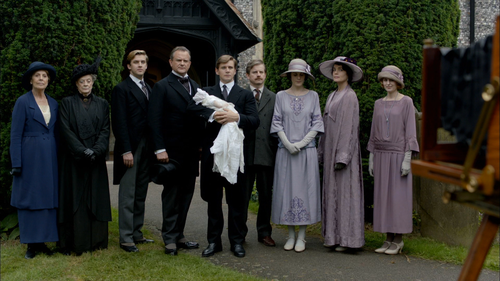 Returning American network shows have the benefit of a summer hiatus, typically three quick months set aside for producers to get their act together and map out a creative battle plan that will carry over 20+ hours of television. "Downton Abbey" elects the opposite route, securing nine-month-long absences between seasons, creating a voracious appetite among superfans for all things Crawley. The extended period allowed for anticipation is incredibly brave, especially now with the program a permanent fixture of message boards, award shows, magazine articles, and personal diaries, creating an intimate universe of admiration and expectation that's turned the series into a smash where most efforts fail miserably. Emerging from the erratic but undeniably attractive second season, "Downton Abbey" picks up the baton for another round of heartache, frustration, humiliation, and doubt, sprinting ahead with a robust third series that corrects many of the minor, heartburn-inducing mistakes that ate away at the previous season, while establishing a bold new realm of mortality that's sure to keep the faithful at the edge of their seats, possibly hurling pillows at the screen in disgust. Read the rest at Blu-ray.com