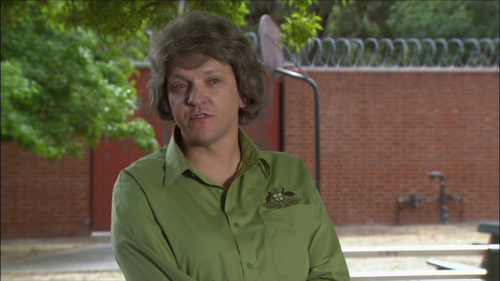 Having only a fringe comprehension of actor/creator Chris Lilley and his fondness for the mockumentary genre (explored in "Summer Heights High" and "We Can Be Heroes"), I was surprised by much of his latest effort, "Angry Boys." Billed as a comedy, the series is actually anything but at times, refusing opportunities for humor to take the entire enterprise with the utmost seriousness, as though Lilley was aiming for respectability with his well-rehearsed sideshow act, trying to breathe life into caricatures that he barely has a handle on. While his improvisational breathlessness is something to behold, Lilley doesn't have much to say with "Angry Boys" outside of some mild satire directed at the fragility of emotionally stunted men. The rest is a blend of profanity, touches of blackface and yellowface, anti-gay slurs, urine and semen jokes, and wild tonal swings that render the show a real patience-tester at times, watching the star feel around in the dark for a narrative direction that he's never able to find. Read the rest at Blu-ray.com