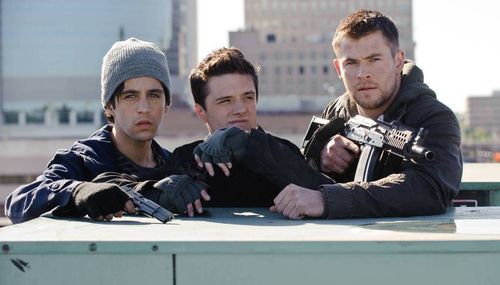 The story about the creation and release predicament behind the “Red Dawn” remake is actually quite interesting. Originally shot in 2009, the picture hit severe financial turbulence when original studio MGM teetered on bankruptcy, a dilemma that also threatened the stability of the James Bond and “The Hobbit” franchises. “Red Dawn” was made to wait while the pennies were counted and sorted, eventually sold off to a smaller distributor altogether. And then questions were raised about its invading Chinese villains. Sensing a dent in its international box office potential, the producers hastily changed the baddies to North Koreans, requiring extensive dubbing, cosmetic CGI, and a rethinking of military motivation. After a three-year wait, countless abandoned release dates, and teases of intriguing behind-the-scenes turmoil, “Red Dawn” is finally here. And now having viewed the final product, I hope the ghost of Patrick Swayze forever haunts the producers for their creative cluelessness and unapologetic mangling of a once wildly entertaining war film premise. Read the rest at Blu-ray.com