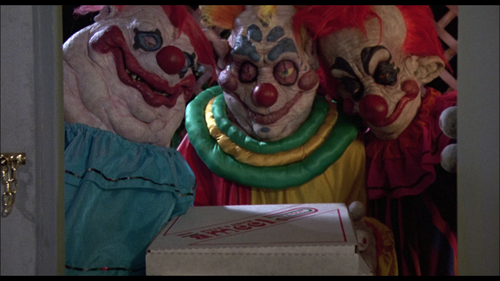 Horror productions tend to attract the same set of elements to shape scares, typically following trends to keep box office prospects alive. 1988's "Killer Klowns from Outer Space" blazes its own trail as a weirdo fright film with a healthy sense of humor, displaying a deep sense of originality as it invents new ways to kill hapless victims. Although budgeted with mere hopes and prayers, "Killer Klowns" is one of the more striking examples of genre invention of the 1980s, with filmmakers The Chiodo Brothers (Charles, Edward, and Stephen, who accepts a credit for direction) working diligently to build this oddball alien clown invasion in full, armed with puppetry, light gore, and a sense of mischief that knowingly weaves through camp and terror, while magically maintaining a PG-13 rating. The title alone encourages immediate dismissal, but for those on the hunt for something miles away from the norm that showcases truly inspired moviemaking minds, "Killer Klowns from Outer Space" is a superb cult distraction. Read the rest at Blu-ray.com