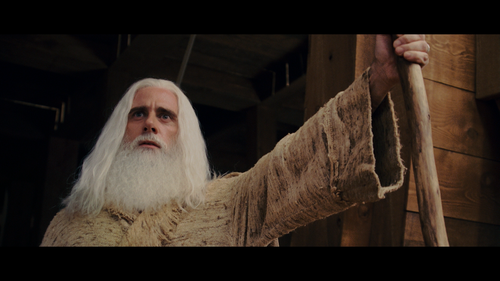 When it comes to a question of preference between 2003's "Bruce Almighty" and 2007's "Evan Almighty," I vote a little differently than the moviegoing public. "Bruce" featured a clever idea that posited Jim Carrey as God, using heavenly powers to alter the world as his character, Bruce Nolan, saw fit. Offering the star an open field to utilize his gifts with slapstick comedy, amplified with spiritual divinity, the feature nailed an impressive tone of mischief, sustaining a pleasant run of farcical activity for at least the first half of the effort. Eventually taking itself seriously as a vessel for moral lessons and melodramatic encounters, "Bruce" fell apart, abandoning impish behavior to become a tool of inspiration, prone to preaching instead of tickling. While far from a perfect film, "Evan" at least has the sense to settle down and enjoy its cartoonish premise, stripping away labored storytelling to carry on as a cartoon with a biblical pinch, saving the heavy stuff for late in the final act. Read the rest at Blu-ray.com