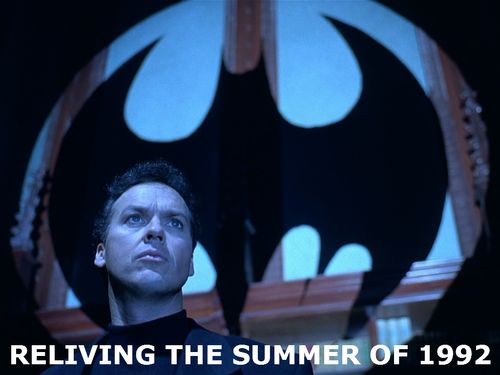 Nutshell: Looking to secure support for a controversial power plant, Gotham City tycoon Max Shreck (Christopher Walken) aims to install monster Penguin (Danny DeVito) as mayor, preying on the ghoulish creature’s insecurities and dreams of human domination. With Batman/Bruce Wayne (Michael Keaton) preparing to defend the city from this latest invasion of chaos, another spoiler arrives in the form of Selina Kyle/Catwoman (Michelle Pfeiffer), a splintered secretary-turned-superhero out to kill Shreck and any man who stands in her way. 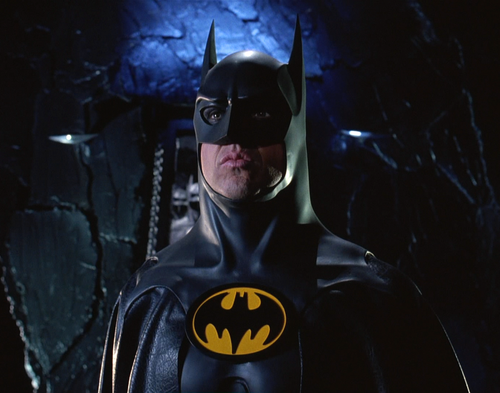 1992: After the voracious excitement surrounding the 1989 release of “Batman” paid off with a marvelous film (covered a little more in-depth here), monster box office, and a universal discharge of geekery, plans for a sequel quickly commenced, generating tremendous anticipation from squirrely movie fanatics looking to secure a second high of omnipresent caped crusader hype.

It was a brutal three-year wait for “Batman Returns,” which strolled back into view with a curious marketing campaign that emphasized the introduction of two supervillains and a gloomier world of tortured heroism for Batman. “The Bat, The Cat, The Penguin” was an odd tagline, yet conveyed the upcoming experience with a fascinating, semi-cheeky minimalism, promising fans a triple threat extravaganza for their premiere summer entertainment, also revealing a winter-thwacked bat symbol on the poster, foreshadowing a tonal chill about the picture that everyone ignored. 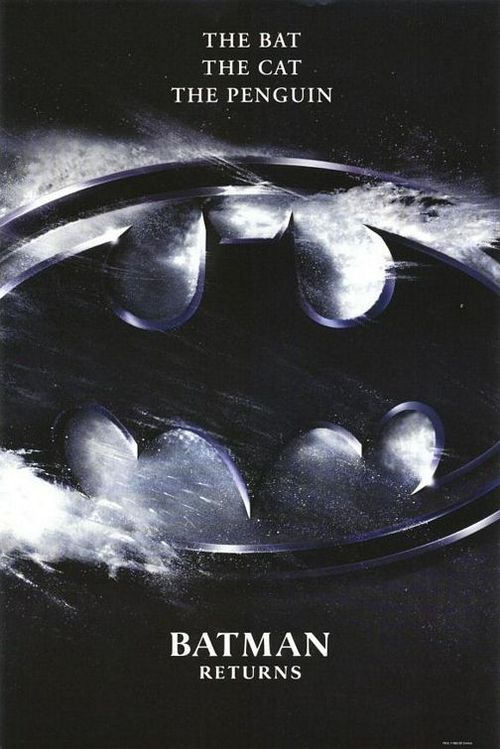 I attended the midnight opening of the feature, refusing to wait a single simple sleep to Dyson up Batman’s next screen adventure. The place was packed with excited young men (and a few women), some breaking out in impromptu Joker impressions to keep the rest of us sufficiently lathered up during the preshow. The crowd was just about ready to pop when the lights went down, greeting the Warner Brothers shield and the opening titles with cheers and applause. Batman was back. Finally.

And then the cheering stopped. 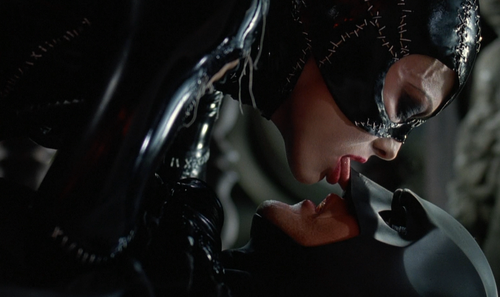 Eerily similar to my first “Alien 3” viewing experience, “Batman Returns” was met with stunned silence from an audience clearly expecting the arrival of the prickly but accessible comic book ambiance of the original picture. No one anticipated such a brooding, angry sequel, with grotesque characters galore and a weird fixation on dark comedy that was seldom funny. I personally felt deflated by the feature, overwhelmed with its fanged approach. It was like being sucker-punched by Tim Burton, who seized the sequel opportunity to make a mess out of his original creation, taking his newfound creative freedom to an extreme few were fully prepared to receive. 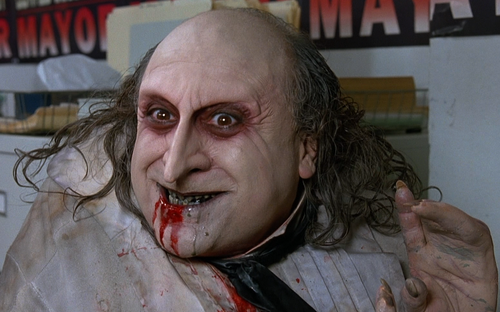 Despite my unsettled wooziness as I exited the theater, I somehow kept an upbeat attitude about the movie, rating it positively in the Brichives, yet still conveying an overall disappointment with the feature, finding the black-eyed gloom overbearing, the villains too easily dispatched, and disliking how Batman was reduced to a mere cameo in his own film. It wasn’t glowing praise, yet I dearly wanted to love the feature, to keep the tingly Batmania trucking along. Over the next few years, my overall opinion of the movie dropped considerably, as I developed something of an allergic reaction to the picture’s forceful gothic design and tedious dark comedy. The “Batman” sequel that was supposed to the second coming was instead a smear of stitched PVC, fish guts, and angst, trying much too hard to be an anti-blockbuster. I simply lost all patience for it. 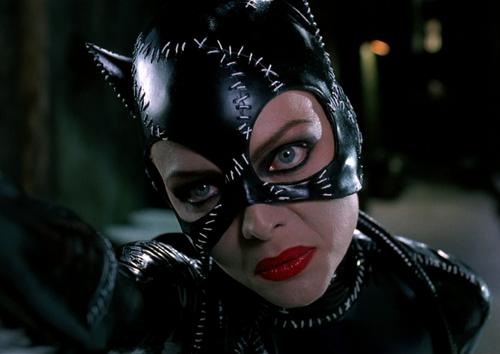 2012: There’s plenty to admire about “Batman Returns,” with its exaggerated production design, marathon scoring effort from Danny Elfman, and genuinely inspired work from Pfeiffer, who’s by far the highlight of the movie, oozing sensuality and feminist voltage as the psychologically fractured feline fighter. It’s a lavish picture splattered with tar, displaying the true limitation of Burton’s rascally imagination when handed a monster budget by a permissive studio. For better or worse, “Batman Returns” is truly the work of a filmmaker with a vision for a sequel, emboldened by the mega-success of the original feature, ready to shift gears from comic book slavery to art school liberation. Batman was no longer torn from the pages of a funny book, but peeled off the bottom of a pair of Dr. Martens.

“Batman Returns” is noisy and mean-spirited, juggling too much with little evidence of editorial patience. It’s a scattered effort that scripts Batman out of the equation, spending most of the running time with Catwoman, Shreck, and Penguin, endeavoring to build a triumvirate of idiosyncratic wickedness, though with Kyle, it’s much more sympathetic, rendering the cat an actual victim of violence while the other two participants just love to play the part. It’s a busy piece of writing that doesn’t actually arrive anywhere, offering viewers bits and pieces of grotesqueries and black comedy, feeling random throughout. While Batman makes his customary appearances, the magic isn’t there, with the hero left with little heroism to share. He’s just a referee in Daniel Waters’s hostile screenplay, brought in to please the fanbase. In fact, Batman barely factors into the plot at all, employed here to feel out the writing’s pedestrian infatuation with smashed psyches (Catwoman and Batman share a toxic personality duality that’s barely explored) and sell Happy Meals (that is, before McDonald’s canceled their promotional interests once parents actually saw the aggressive film). 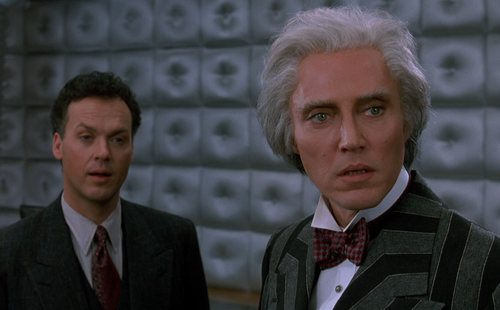 Burton and Waters have a gay old time with “Batman Returns,” twisting the first picture’s shadowy nobility into a scary goof, bouncing from horrifying characterizations to shticky one-liners and jokey sequences. Attacking Joel Schumacher for his cartoon approach to “Batman & Robin” is entirely justified, but let the record show he wasn’t exactly breaking new ground with ideas such as a Batman credit card. In this film, Bruce Wayne fights crime with a Bat-branded CD player. 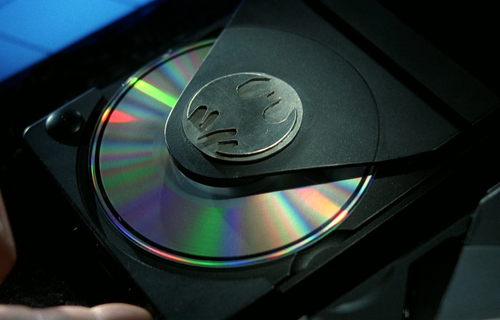 Waters plays the film like a violent “Laugh-In” sketch at times, slipping in pronounced bits of black comedy that tend to derail the dark art Burton is focusing on. Walken has his way with a few of the zingers, but DeVito’s Penguin is a real puzzler. Not content to play up the monster’s tragic tale of abandonment and zoo-stationed godliness, Waters and DeVito transform Penguin into a sexually frustrated blob of spit, showing more fascination with ickiness than his story interests, blurring the purpose of the character. He’s the bad guy with traditional overtones of world domination (leading his army of missile-launching bird), yet Penguin ends up a casual threat -- the audience is left with a greater understanding of his perversions than his ultimate goal for Gotham. This movie needs less lewd flipper flipping and more…anything else. Where’s Beetlejuice when you need him. 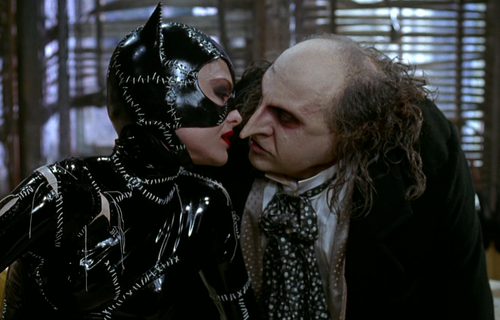 In the end, “Batman Returns” feels claustrophobic (the sets are enormous, but the film feels small) and exhaustive with screen detail, robbing the feature of momentum and a legitimate superhero thrill. It’s not a dreadful picture, just a grandly misguided one, with Burton granted too much power to chase every macabre tangent, swiftly losing control of the effort. The sequel has its defenders, those drawn to this rowdy riff on comic book mayhem, but it remains a sore spot for me. As much as I love “Batman,” I find it supremely difficult to muster much interest in this indulgent jumble of mischief and madness. The two extremes act like tacks affixed to the seat of every ride contained within Tim Burton’s “Batman Returns” carnival. Kurt Russell fought the law and the law won. 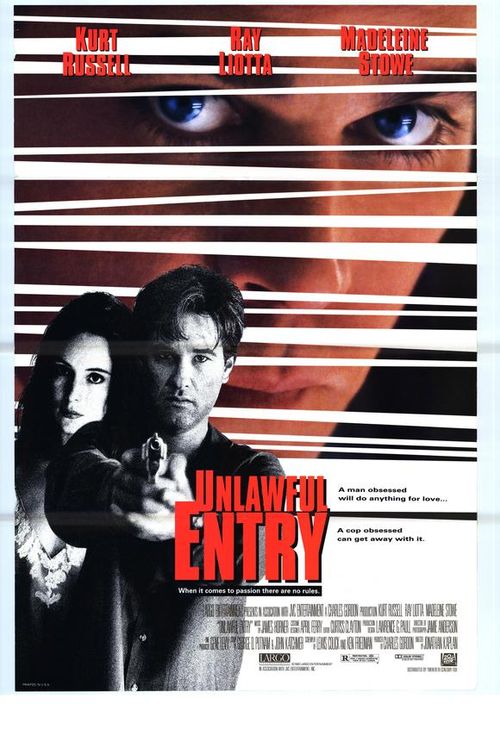