It’s not like Alexandre Aja’s 2010 remake of “Piranha” was rocket science, but the production managed to create something ridiculous that felt like an invitation to a big screen party, slathered with gore, populated by gifted actors, and mindful of all the exploitation elements that make the genre such a riot. Aja had topless women performing an underwater 3D ballet, “Piranha 3DD” director John Gulager offers a David Hasselhoff cameo. It doesn’t take a genius to view this miserable sequel as one giant step backwards in terms of creative ambition and viewer satisfaction. Although filmed in 3D, the extra dimension in “Piranha 3DD” is the crushing wave of disappointment smacking the viewer roughly two minutes into the picture when Gulager’s toxic moviemaking touch is revealed in full, captured in a moment where the corpse of a cow farts out a piranha egg. It’s going to be a long 70 minutes (82 minutes with end credits).

A year after the underwater rampage at Lake Victoria, piranha paranoia has died down, with creep Chet (David Koechner, a bald actor wearing a crude bald hairpiece) opening an updated version of the Big Wet Water Park, now staffed by strippers and highlighting an adult-only pool area where anything goes. Returning home for the summer, marine biology student Maddy (Danielle Panabaker) is stunned to learn that her stepfather has ruined the family park, forced to investigate just how far Chet has gone to slash operating costs. Unfortunately, the Lake Victoria piranhas have returned to further their carnivorous quest, infiltrating Big Wet through drainage pipes. Confronted with the death of her friends and the promise of an utter massacre at the water park on opening day, Maddy and pal Barry (Matt Bush) set out to prevent the invasion, while guest of honor David Hasselhoff struggles with the depths of his fame, finding paying customers relying on him to prevent aquatic disaster. 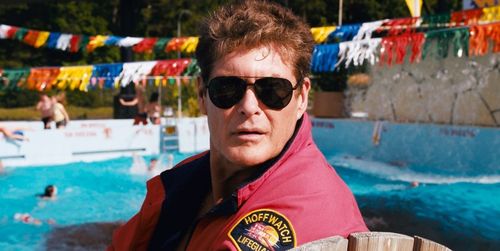 Aja’s “Piranha” was an extremely amusing, deliciously icky horror production that inventively avoided a tired remake scenario, bringing an exceptional kick of frights and foolishness to the screen. It was a genuine B-movie miracle, managing leering behavior and gross-outs with startling skill. “Piranha 3DD” looks like Gulager (the “Feast” trilogy) and his team are simply making up the feature as they go, stitching together a barely coherent gorefest on a visibly low budget, bizarrely electing a quick cash-in direction for a franchise that, with a little effort, might’ve gone on to multiple installments of acceptably decreasing quality. Instead, “Piranha 3DD” jumps into the deep end of bad moviedom without hesitation, using camp as water wings.

The premise is gold. The potential for a “Piranha” eruption at a water park is ripe with possibility, raising hell inside of a business devoted to all sorts of aquatic distractions, teeming with a diverse display of tourists and employees. While “Piranha 3DD” establishes expansive Big Wet opening day festivities, Gulager doesn’t do anything with the property, making the park feel about the size of a backyard pool. Most of the picture is devoted to Maddy’s homecoming with friends and enemies, and their encounters with the piranha, with Shelby (Katrina Bowden), the requisite virgin, facing the wrath of the killer fish from the inside, as a gilled warrior manages to slide inside of her during a skinny dipping outing. The resulting mess with her boyfriend involves blood-soaked sheets and a hasty amputation of a penis. Granted, penile trauma was one of the sicko highlights of the previous feature, yet that genital mutilation was arranged as comeuppance for a particularly unsavory character. In “Piranha 3DD,” it’s just a cheap, mean-spirited shock in a film of repeated stupidity -- keep in mind it took three men to write this script.

The Hasselhoff material is woefully dated and unfunny, with the aging sex symbol used as exaggeration in a film that didn’t need the additional broad push. “Piranha 3DD” also returns Christopher Lloyd to the fold as the manic marine biologist Mr. Goodman, only here to essentially set-up the next sequel, while Paul Scheer and Ving Rhames pop up to tag-team a few scenes as survivors of the Lake Victoria nightmare. Once again, the moments are played with a pronounced wink, making the entire enterprise feel like a crummy basic cable effort. The rest of the cast does what they can with brain-dead material, but they’re only here for the slaughter, though, to her credit, Pannabaker does commit the script, racing around beaches and pools in a bikini top, communicating plausible worry.

It’s bizarre to criticize an offering of junk food like “Piranha 3DD,” but there’s a frightening shortage of imagination to the picture, especially in the climatic showdown between the panicked swimmers and the devil fish. Blood and guts are splashed around the frame, yet what’s missing here is directorial authority, with Gulager a lousy gore zone conductor incapable of building momentum with easy lay-up horror elements. There’s so much effort devoted to the launch of the wheezy Hasselhoff gag, the piranhas are almost an afterthought.