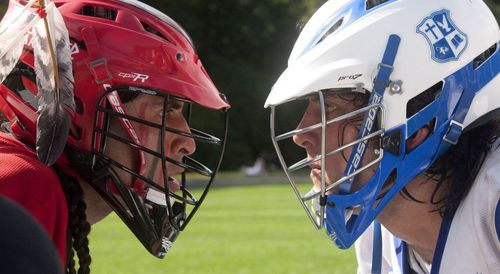 “Crooked Arrows” is a film I wanted to like, came close to enjoying, but was consistently pulled away by some poor storytelling decisions. It’s one of the first movies to concentrate solely on the game of lacrosse, a sport that’s grown in popularity in recent years after spending centuries as an activity for Native American cultures, where it’s known as “The Creator’s Game.” It’s a highly entertaining, fast-paced sport that deserves a better onscreen celebration than “Crooked Arrows,” which slaps around every cliché imaginable, looking to win over the audience through the comfort of familiarity. It has charm and a refreshing cultural perspective, but the predictability is often too much to bear, tanking the potential for a proper big screen exploration of lacrosse.

A casino lackey trafficking in Native American stereotypes to make a buck, Joe (Brandon Routh) is urged by his boss to use his half-blood Sunaquat tribe connections to charm his father, Ben (Gil Birmingham), and the community into delivering extra land for a planned resort expansion. Resisting his son’s slick ways, Ben urges Joe to accept a spirit quest, asking the former lacrosse player to coach the local prep school team. A group of bickering losers, the Crooked Arrows are in dire need of a leader to help focus their gifts, yet Joe isn’t ready to take the responsibility at first, needing time to process his haunted past on the lacrosse field and his place in Sunaquat society. With inspiration provided by his former flame, Julie (Crystal Allen), Joe is ready to train the Crooked Arrows, finding the locals looking to the lacrosse field to reclaim the dignity they’ve lost to Native American casino culture and a general disinterest in heritage from younger generations. 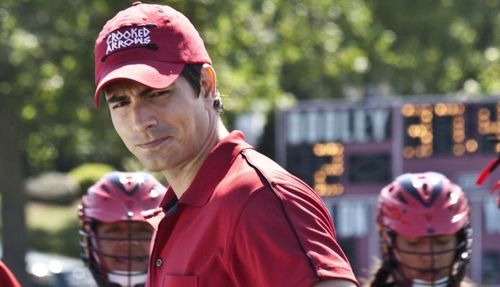 The director for “Crooked Arrows” is Steve Rash, once the helmer of “The Buddy Holly Story,” but lately known for his work on “Road Trip: Beer Pong.” Rash has an obvious affection for the sport of lacrosse and native traditions, positioning the picture as a tribute to reservation spirit, taking time to chastise those who’ve pimped out their own nation with casino endeavors, using Joe as a symbol for the soulless ones who’ll do anything for monetary reward. While I wish the politics of the effort were more refined, there’s something appealing about the feature’s stand against the onslaught of casino construction, finding a place of pride in a community learning to come together as one.

“Crooked Arrows” has a heart, but it’s buried under layers of nonsense. The screenplay is overstuffed with formula, almost afraid to take on any originality whatsoever, using the “Bad News Bears” template to tell the story of grumpy Joe and his lackluster team of hotheaded goofs. There’s even a Kelly Leak character, with the coach coaxing a gifted outsider into the team. The rise of player pride carries insufficient excitement, especially when the average viewer is always two steps ahead of Rash, mentally ticking off the clichés on the underdog sporting movie checklist as the losers grow into a powerful lacrosse unit, working out ball-hog and endurance issues along the way. “Crooked Arrows” is most confident drilling into Native American customs, following the boys as they embark on a vision quest to discover their personal animal spirit, or learn the language to help develop a field code to confuse rival teams. A tighter script might’ve seized a real sense of pace and texture from the story. Instead, Rash labors through the details, backed by an impossibly crummy soundtrack of bland rock songs and an unironic use of Chumbawamba’s “Tubthumping” to inspire the troops.

Rash keeps the ridiculousness rolling in with a Big Game finale that finds the Crooked Arrows facing off against an Aryan machine coached by a John Kreese knockoff. It’s excessive, saved in part by the game action, which moves effectively, displaying a rough sport with respect for player dedication. Still, the heaviness of the hackneyed screenwriting and apathetic direction (the film’s thickly processed look is also a drag) eventually pins “Crooked Arrows” to the mat, stripping the life out of a potentially inspiring perspective on sporting achievement and native concerns.