Unlike many of its low budget brethren, “Transit” has a singular drive to thrill its audience with ferocious displays of gunfire, car stunts, and feverish performances. It’s a ridiculous movie, abandoning logic immediately upon commencement, yet its dedication to pace and intensity is charming and frequently effective. It’s a turn-your-brain-off viewing experience, with director Antonio Negret eager to share a little Louisiana troublemaking with viewers, hitting juicy points of pursuit and intimidation with a clear vision for violence. Instead of playing dead due to lack of funds, “Transit” carries itself with confidence, delivering the goods in a clean and efficient manner.

Off on a family rehabilitation camping trip, Nate (Jim Caviezel) and Robyn (Elisabeth Rohm) are working on their marital troubles with kids Shane (Sterling Knight) and Kenny (Jake Cherry) in tow, hoping a getaway will clear recent tensions in the household. Also on the road are criminals Marek (James Frain), Arielle (Diora Baird), Losada (Harold Perrineau), and Evers (Ryan Donowho), who’ve used Nate’s truck to secretly stash millions in stolen money, hoping to shake off police interest. Clearing out of the city, the gang looks to reclaim their loot, locating Nate and his clan on the open road. Using blunt force to bring the family to submission, the crooks find their efforts only manage to exacerbate the situation, forcing Nate into protection mode after his scandalous past is revealed, prompting the harassed dad to do whatever he can to protect his loved ones while Marek grows more desperate. 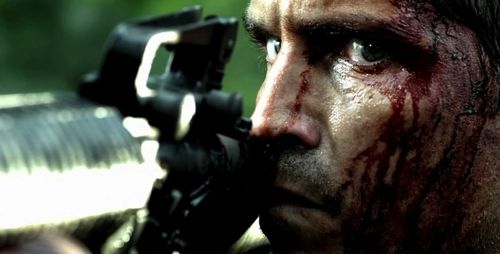 “Transit” is something of an old-fashioned offering of exploitation cinema. Although it employs unfortunate trends in HD cinematography (the processed look of the film is a drag), the core experience of the picture is lean and mean, taking to the highways of Louisiana to create a mess out of a team of baddies and a dysfunctional family, with plenty of violent encounters and heated verbal exchanges used to whip the feature into a fury. Michael Gilvary’s script is built out of spare parts from other actioners, but his interests in creating twists and turns is admirable, looking to disrupt predictability with sacrifices and shootings, always hunting for ways to make life more difficult for Nate, who has to contend with a skeptical wife, a pack of thugs on his tail, and a bag of money that he clumsily loses at one point, tightening the already suffocating noose around his neck.

“Transit” can be extremely dopey when trying to introduce suspense into the picture. A great example of Negret doing whatever he can to keep the feature flying is an early scene where Marek and the ruffians lose track of Nate’s truck on the highway, finding the family traveling along an exit ramp the brutes have already passed. Instead of simply U-turning to pick up the scent again down the road, “Transit” turns the act of backtracking into a state fair stunt show, collecting burning rubber, car accidents, and bootleg turns into a grand ballet of car rerouting. It’s excessive, but oddly endearing, isolating Negret’s eagerness to please with irrational behavior, using his sandbox to create a sandstorm. 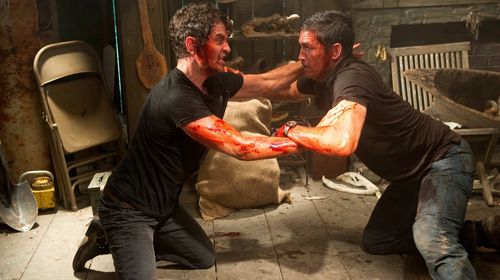 There are numerous shocks to ornament the chase, a few on the cheap side, but most are successful. As the script introduces cops and sketchy bayou residents to open up the scope of the feature, Negret amplifies the conflict with murder, amputations, hotel invasions, and, of course, roadside disasters. “Transit” takes great care of its automobile mayhem (shades of Caviezel’s 2004 effort, “Highwaymen”), overwhelming the sound design of the movie with squealing tires and roaring engines. Still, the finest jolts of the picture are found in the midst of desperation, with trigger-happy crooks losing control of the situation, forcing the bickering brood into pure survival mode, with lingering doubts about Nate’s honesty massaged into the story adequately.

Predictability is largely avoided or ignored throughout the picture (with Baird and the deafening engines, it’s easy to be distracted), yet the final act makes the mistake of hunkering down in a single location, breaking out a mano-a-mano showdown to find a proper button of visceral revenge for the audience to sink their teeth into. Brakes should never be applied on a film like “Transit,” though the disappointing ending is forgivable when the production treats the rest of the B-movie like a thrill ride, always keen to keep the viewer on the edge of their seat.