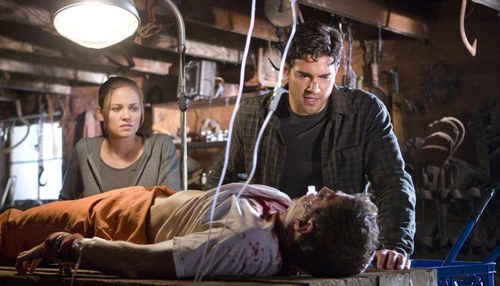 “The Tortured” enjoys an enticingly visceral premise, working a heavy exploitation mood to generate cheers and jeers from its audience. Sadly, the promise is fleeting, as the film is produced by the team that gifted the world the “Saw” movies, which is exactly the direction “The Tortured” takes as it burns through vicious acts of murder and comeuppance. It’s an angry picture, but that dependable sense of rage doesn’t carry through to the end. Instead, the effort dissolves into a strange genre predictability, almost afraid to take the story exactly where it should rightfully lead.

After enduring the kidnapping of their 6-year-old son, couple Elise (Erika Christensen) and Craig (Jesse Metcalfe) are trapped in a prison of depression and blame, unable to rest until the boy is found. When the pair learns their child has been murdered at the hands of serial killer Kozlowski (Bill Moseley), their world crumbles, hopeful that the courts will deal with this heinous crime appropriately. When Kozlowski gets off with a light sentence, Elise and Craig are enraged, unable to accept such a fate for an evil man. Putting his medical training to use, Craig interrupts a prison transfer to kidnap Kozlowski, eventually chaining him to a table inside a remote farmhouse. Now offered an opportunity to exact revenge on the brute, Craig and Elise find difficulty processing the symphony of pain they’ve planned for the killer, coming to question their motives as the creep lies bleeding, burned, and bewildered. 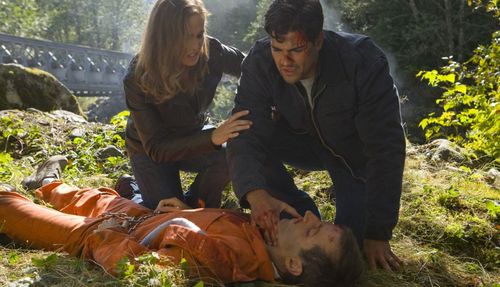 “The Tortured” is junk food for gorehounds, but it retains a certain cry of despair in the early going that helps to wash away the low-budget limitations restraining director Robert Lieberman (“Fire in the Sky”). Dealing with an unimaginable situation of loss facing two loving parents, the feature captures the darkness of a missing child case, soon interrupted by a mutilated body, cruelly extinguishing hope that Elise and Craig will see their young boy again. It’s an emotionally flattening set-up for the movie, achieving the fist-making sense of outrage this type of exploitation picture requires before it moves on the second-act horror show. While it’s shot unimaginatively, drained of color and cinematic composition, “The Tortured” kicks off with a bang, developing a tone of bloodlust that promises a whopper of a revenge plan.

Once Kozlowski is strapped to the table, the movie loses its momentum, with the titular promise kept in a literal sense, observing Craig and Elise take turns punching, sticking, and suffocating their prisoner, even burning off one of his nipples to keep the monster alert. The turn into sadism isn’t unexpected, but it’s surprisingly blunt, chasing now-exhausted trends in horror (the film was shot in 2007), guided by the folks at Twisted Pictures, who made a mint selling torment to the masses in “Saw” and its endless sequels. “The Tortured” is like “Saw” in many ways, down to protracted sequences of suffering and a twist ending. The performances are also on the unwieldy side, with Metcalfe making for an uninspiring mad dad, while Christensen fares better, showing a funky feral side that’s surprising from such a muted actress.

Simplistic and incredibly short (running only 75 minutes), “The Tortured” attempts to beef up the viewing experience with a nightmare sequence, a little celebratory sex between the parental terminators, and some procedural nonsense with cops on the hunt for Kozlowski’s whereabouts. Instead of straightforward pain, the film might’ve found an interesting route with more flavorful moral questioning, extracting a greater sensation of shame from Craig and Elise, who never seem very bothered by their slide into madness. Or perhaps a full reverse was in order, taking “The Tortured” into a surreal direction of operatic genre provocation. Disappointingly, the story doesn’t head anywhere of interest once initial despair dies down, leaving the feature in a macabre daze, dependent on a proven formula to find its way back to the light.