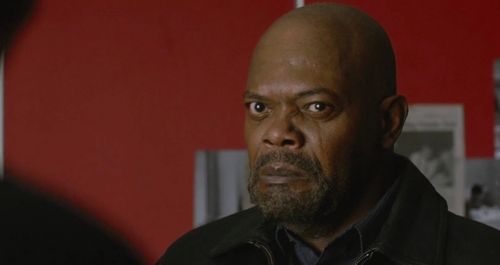 While it doesn’t come together as a gripping motion picture, “The Samaritan” does offer actor Samuel L. Jackson something different to play for a change. Gravitating to the same brute role time and again (years back, Jackson admitted he picked acting gigs based on his proximity to golf courses), the icon finds a softer side to his personality in his latest effort. Although guns are brandished and heads are smacked around, Jackson hits an effective note of remorse and resignation, blended with some unnerving sensuality to give a formulaic grifter movie an interesting spin, though this interest in unexpected directions is short-lived.

After spending the last 25 years in prison, Foley (Samuel L. Jackson) is ready for a fresh start, piecing his life back together after wasting his youth as a con artist, which eventually led to the murder of his partner. Settling into a dreary life, Foley is soon challenged by Ethan (Luke Kirby), the son of the dead man, who’s come to the ex-con with an opportunity to steal millions of dollars from Xavier (Tom Wilkinson), a remarkably irritable crime boss. Refusing the invitation, Foley instead finds intimacy with young Iris (Ruth Negga), a troubled junkie who returns peace to the crook’s life. Using Iris as a pawn, Ethan convinces Foley to step back into his old profession, embarking on a complicated scam that requires patience and skill, two qualities the antagonistic punk doesn’t possess, much to Foley’s frustration.

At the heart of “The Samaritan” is an old-fashioned con game, featuring Foley suiting up again after a 25-year break from the action to steal money from a malevolent man. Despite the reliable premise, it takes the picture nearly an hour to find its footing as a grifter saga, with the third act not worth the extensive wait. “The Samaritan” isn’t a feature about the art of stealing, but the characters that inhabit this corrosive lifestyle. There’s disappointment in this revelation, with most of the film devoted to the discussion and planning of the con job, leaving a final payoff without the spark of screen electricity typically associated with such fantasies of fraud.

Instead of “Ocean’s Eleven,” “The Samaritan” wades into emotional darkness, developing Foley as a broken man facing the world again after years behind bars, having difficulty understanding what his role in society should be. While Ethan’s offer is tempting, Foley wants nothing to do with prison life, finding calm in Iris’s company, sharing unusual chemistry with the disturbed woman, making something of a home for themselves. The screenplay by Elan Mastai and David Weaver (who also directs) has a small number of tricks up its sleeve to keep audiences alert, disrupting Foley’s cocktail-fueled rehabilitation efforts with a few kinks in the story, one that holds legitimate surprise due to its shocking revelation about Iris. 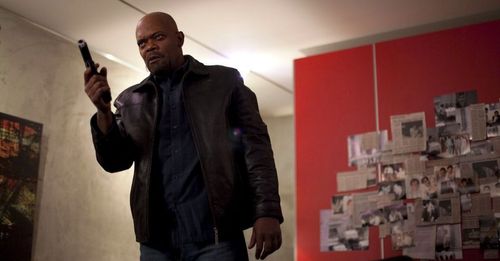 “The Samaritan” doesn’t pull its punches, but there aren’t many hits to be had in this dreary picture. Sticking to character, the movie loses the essential vitality of the con, while the script doesn’t provide much personality to help generate tension. Going for a light noir touch, Weaver fumbles pace and suspense, dwelling on uninteresting forays into misery, working to build Foley as a tragic figure possessing effortless cool around violence. Jackson’s performance is generally strong, finding fragments of sexuality and introspection he’s not traditionally hired to perform. The change in pace is welcome. Unfortunately, there’s not much else for the actor to do once the story moves on from Foley’s gloom, and the supporting cast, including Kirby’s lackluster turn as a jittery troublemaker, leaves much to be desired. Not helping the illusion is the film’s subpar technical achievements, including some of the worst greenscreen effects I’ve seen in recent memory.

“The Samaritan” doesn’t provide an exhaustive ride of crime and woe, failing to build to a climax of quick thinking and unimaginable sacrifice. It’s thoroughly mediocre, which feels like such a disappointment when one considers that the script’s ingredients include murder, deception, sex, and ungodly sin.